This article is over 13 years, 7 months old
The existing terrorism laws have the potential for miscarriages of justice.
Downloading PDF. Please wait...
Tuesday 17 June 2008

The existing terrorism laws have the potential for miscarriages of justice.

They appealed against their convictions and life sentences on 32 legal grounds.

The men will criticise the handling of the 14-month trial and argue that there were abuses that started with the torture of one defendant, Salahuddin Amin, in Pakistan.

They will also complain about telephone wiretaps and the jury’s exposure to publicity, their lawyer Patrick O’Connor said at a hearing.

Seven men were arrested in March 2004 following the discovery of half a tonne of chemical fertiliser in west London. Omar Khyam, Waheed Mahmood, Jawad Akbar, Salahuddin Amin, Anthony Garcia were all convicted of terror offences.

The defendants denied there was a plot. Some said they did not know what the fertiliser was, or that they were only interested in sending money to fighters in Kashmir and Afghanistan.

At the time of the original trial, solicitor Imran Khan said the trial was marred by “coached witnesses” and “an atmosphere of hostility against Muslims at home and abroad”.

The key prosecution witness in the trial was Mohammed Junaid Babar. Since his arrest in New York in 2004, Babar has given evidence to prosecutors in four countries. He was given immunity from prosecution in Britain in exchange for his testimony.

The appeal hearing, which was closed to the press shortly after it began, continues.

Saeed Ghafoor was in prison when he claimed he was plotting to pack three limousines with gas canisters and detonate them at the Bluewater shopping centre in Dartford, Kent – even though he thought it was in Devon.

He was serving a 12-month prison sentence for trying to strangle his sister. The first prison officer to hear his claim thought he was a fantasist.

Nevertheless Ghafoor was put on trial on terrorism charges. The court heard how when another prison officer visited his cell, Ghafoor tapped a folder containing news reports of the Iraq war and told the officer, “These are my plans.”

Pierce Arnold, for the prosecution, told the Old Bailey, “It appeared on the face of it to be a serious threat.”

The authorities took Ghafoor’s threats seriously, despite the prisoner’s belief that Bluewater was in Exeter, Devon. When told it is in fact in Kent, he said he had not yet fully “finalised” his scheme.

Ghafoor pleaded guilty. His sentencing was adjourned until 30 June. 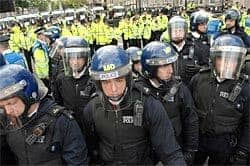 Gordon Brown wins 42 days detention, but at what price?