Cash for honours: Committee set to reveal more on donations

The peer attempted to prevent a parliamentary committee publishing a letter from one of the 12 people who secretly loaned Labour a total of £14 million before the 2005 general election.

However, the letter, sent to MPs by millionaire Sir Gulam Noon, will be published in the committee’s report this week.

Lord Levy – known as ‘Lord Cashpoint’ – is alleged to be the ‘senior party man’ who told Noon not to declare his £250,000 loan to the Labour party while his nomination for a peerage was being considered, because it was refundable and therefore circumvented party funding rules.

Noon offered a donation – but was persuaded to make a loan of £250,000 which, at the time, did not have to be declared.

He did not enter the loan details on a House of Lords nomination form after being put forward for a peerage in autumn 2005.

A series of key Downing Street figures, including Blair, were interviewed by the police. But the Crown Prosecution Service decided there was not enough evidence to press charges.

Assistant Commissioner John Yates told the committee that the police investigation was obstructed by a lack of cooperation. 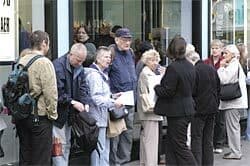