This article is over 10 years, 3 months old
Unite Against Fascism together with One Society Many Cultures is calling for delegates to sign up for an upcoming national convention in defence of multiculturalism.
By Simon Assaf
Downloading PDF. Please wait...
Tuesday 04 October 2011

Unite Against Fascism together with One Society Many Cultures is calling for delegates to sign up for an upcoming national convention in defence of multiculturalism.

The event is sponsored by the TUC and has won broad backing from Muslim organisations, trade unions, MPs, MEPs, the NUS Black Students Campaign and community organisations.

The convention will bring together the alliance that delivered victory against the English Defence League (EDL) in Tower Hamlets on 3 September.

There have been scores of successful anti-EDL mobilisations in cities and towns across the country. This follows the electoral collapse of the Nazi British National Party (BNP) in recent council elections.

Yet problems remain. David Cameron’s condemnation of multiculturalism in his Munich speech earlier this year has provided legitimacy to racists.

His outburst was a thinly veiled attack on Muslims. After the riots, black communities are also in his crosshairs.

Meanwhile, home secretary Theresa May wants lecturers to spy on Muslim students if they are suspicious of their political views. The UCU lecturers’ union is refusing to implement this.

We want to turn our recent victories over the EDL and BNP into a broad campaign in defence of multiculturalism. The national convention on 15 October is the launchpad for that campaign. 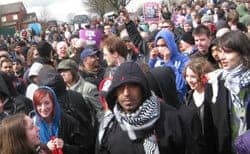 Protest against the racist EDL in Dudley this Saturday