Staff at Central Foundation Girls’ School in Bow, east London, had been repeatedly told that striking wouldn’t change a thing.

But now, after two joint one day strikes this term, workers in the Unison and NUT unions have won a victory on some of their key demands.

Pay cuts have been withdrawn and there is a satisfactory settlement for members facing compulsory redundancies.

The teachers also succeeded in winning key concessions on their conditions including observations and sickness policy. Their workload will be reviewed, with all new proposals to go to the unions before being put to the staff.

Teaching staff are to increase their teaching load, but by only half of what the management had been demanding. This too will be reviewed next year.

By campaigning and striking together, staff have found their voice and a strength they didn’t know they had.

It will be important to maintain this strength in the months ahead to ensure the new agreement is properly implemented. 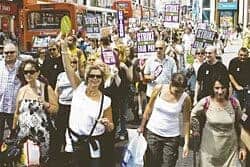