City bonus scandal grows… Bob the banker is robbing everyone

“There was a period of remorse and apology for banks—and I think that period needs to be over.”

That was what greedy banker Bob Diamond, the highest paid bank chief executive in Britain, told MPs on Tuesday.

He even moaned that people had accused him of “casino banking” whining, “It’s not pleasant for us.”

He refused to say whether he would give up his bonus of £9 million this year—but added that he thought it was “restrained”.

This scumbag banker splits his time between his £15 million mansion and his £12 million New York apartment. He flies between the two in a £40,000-a-time jet.

Meanwhile, the economic crisis—the one he thinks banks should stop apologising for—continues to rip through working class people’s lives.

Tory toff David Cameron tells us we have to swallow pay freezes, job losses and public service cuts—to pay for the bank bailout.

Yet when it comes to his banker buddies, Cameron warns against “banker-bashing” and claims he has no power to stop them trousering as much as they want.

Meanwhile Bob the banker is laughing all the way to the bank. Can we stop it? Yes we can! 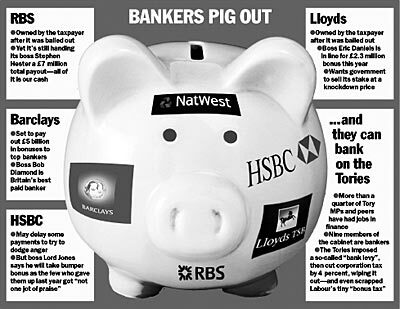 Bankers pig out on bumper bonuses