Activists at the Occupy London protest outside St Paul’s Cathedral are facing the continued threat of forcible eviction.

The City of London announced a ‘pause’ in their legal action to evict the protest as Socialist Worker went to press. But it is unclear how long it will be until further action is taken.

The move to evict followed a special meeting of the City of London’s Planning and Transportation Committee (PTC) held on Friday of last week.

The meeting overwhelmingly endorsed a proposal to take legal action against the protest. It explained, “The City of London Corporation is not seeking to prevent protest but to limit the exact nature and form of protest it has chosen. A 24-hour non-camped protest would be permissible in this location.”

The meeting was held in secret. No minutes are available, no witnesses were there, no press reporters were allowed in. So what exactly is the PTC?

According to the City of London’s website, the PTC is made up of 32 members. Of these, seven are women, and all are white.

Three are registered Tories, including Sir Paul Judge Alderman, who was the party’s former director general. There’s a lone Lib Dem. Six people list Freemason charities in their declarations of interests, and three are on the Institute of Directors.

Some 29 hold, or have held, jobs in the City. But there’s no chance of finding a cleaner on minimum wage among its ranks.

Martin Farr is the chair of the PTC. He is a partner in GVA Grimley, a property consultancy company. His deputy is Michael Welbank, previously director of Entec UK, another consultancy firm.

All were elected. But the City of London is hardly democratic.

There are just under 8,000 residents in the City. But there are 40,000 voters. This is because businesses in the square mile all get to appoint voters.

Until 2002 there were 16,000 business votes. But then the City put a motion to parliament, supported by then prime minister Tony Blair, which doubled the City’s vote to 32,000.

Three institutions govern the City. They are the Court of Aldermen, the Court of Common Council and the Lord Mayor. Residents and businesses vote on the first two.

Those you can vote for must be “freemen”. There are four ways to become a freeman.

The first is by “servitude”—by having an apprenticeship with another freeman. A livery company (a ceremonial business association) can appoint you. You can become a freeman by heredity or by paying a “freedom fine”—if the Common Council accepts you, of course.

This basic structure has remained pretty much unchanged since 886AD.

It works well for the 1 percent. There’s little chance of an elected representative blocking a skyscraper being built, for example, or demanding investment in the poverty-stricken neighbouring borough of Tower Hamlets.

The City’s wealth is so massive that its spending is covered by the interest it gets on its hoarded loot.

It also runs one public school for boys and one for girls—and if you can’t afford them you could go to the City of London Academy school in Southwark.

It even has its own police force, which supposedly focuses on city corruption.

The Occupy London assembly adopted a demand on Friday of last week for the City to be democratised. Until that day comes, it should come as no surprise that the City’s authorities firmly represent the 1 percent. 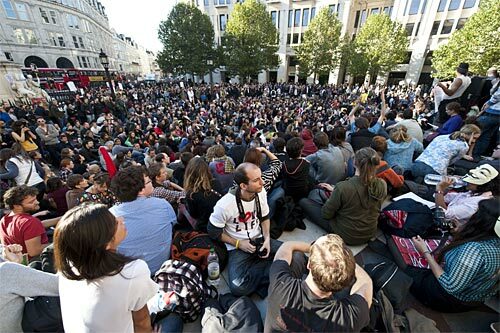