Clampdown on campus is an attack on protest rights

Up to 150 student and trade union activists marched in protest at plans to close University of London Union (ULU), on Wednesday of last week.

They faced a violent police clampdown. And cops disgracefully arrested ULU president Michael Chessum on Thursday of last week, under section 11 of the Public Order Act.

Around 100 students protested outside the police station where he was held for four hours.

“We are organising to pass motions and produce an open letter condemning the role of the police on campuses to stifle protest.”

Michael was released on bail, prohibiting him from attending any protests at the University of London.

His victimisation comes as police were exposed  seeking to pay students at the University of Cambridge to spy and inform on activists from groups such as Unite Against Fascism.

These attacks on the right to organise and protest on campus must be resisted.

Transforming the student union in Essex 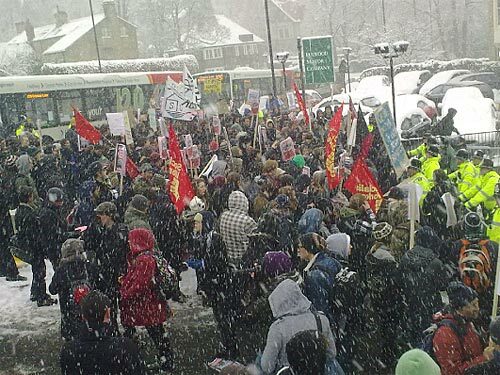