Climate campers ask: how do we change the world?

This article is over 12 years, 4 months old
The workshops and discussion groups that were the key focus of this year’s camp saw real arguments about how to take the movement forward.
Downloading PDF. Please wait...
Tuesday 01 September 2009

The workshops and discussion groups that were the key focus of this year’s camp saw real arguments about how to take the movement forward.

There were many debates, including the relationship between individual action and mass action, attitudes to the state, and how we should deal with capitalism.

At the entrance to the site a huge banner told the crowd, “Capitalism is crisis”.

It is wanting to challenge the system we live in that motivates and mobilises the majority of people at climate camp.

The question is how do we do it?

Media stunts were organised throughout the week, but they involved small groups – not the camp as a whole or the local community.

This became a key point of debate.

Don told Socialist Worker, “I’m really into direct action. But to feel like there are secret affinity groups that you can’t join or be part of is annoying.

“It’s against the spirit of coming together to challenge the system collectively.”

Amy agreed. “For me it’s about doing things collectively, not a small group of people thinking they have the answers.”

Autonomist and anarchist ideas were dominant at the camp, and some were hostile to the presence of organised socialists and their literature.

But this hostility was not the majority view.

Katy, a student, said, “I’m not part of any group but it doesn’t bother me that there are people here talking about their ideas – that’s what everyone is doing.”

“There shouldn’t be restrictions on organisations at the camp when we all share the same goals.”

Saul agreed. “If people are serious about climate change then come one come all I say.” 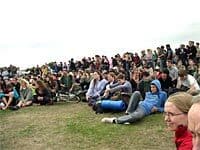