Climate change: a step taken, but a giant leap is still needed

George Bush and Tony Blair headed into these talks with the demand that any agreements on greenhouse gas emissions after the Kyoto deal expires in 2012 would be voluntary.

But this idea was rejected at Montreal.

The countries already signed up to the Kyoto deal—which notably does not include the US, the world’s largest polluter—have agreed to the idea of binding emissions targets after 2012. Further talks in May 2006 are set to discuss these targets.

The US’s stance was firmly and publicly rejected, reflecting the weakening of the position of the US at home and abroad as a result of the invasion and occupation of Iraq. US negotiators walked out of the talks, but were later forced to return.

The Canadian prime minister, Paul Martin, rebuked the US. “To the recalcitrant nations, including the US, I would say this—there is such a thing as a global conscience, and now is the time to listen to it,” he said.

Grassroots pressure is building, not least in the US itself, where city mayors representing 40 million people have pledged to meet Kyoto-style emissions targets.

In Montreal, 40,000 people took to the streets to demand action—the biggest demonstration on this issue ever seen. Smaller demonstrations took place in cities all over the world.

Although what came out of Montreal is better than most climate campaigners expected, it is not even nearly enough.

The Kyoto deal binds countries to a 5 percent reduction in their 1990 emissions levels by 2012. The next round is expected to call for an additional 5 percent cut.

But even a 10 percent reduction in emissions by countries signed up to the deal would not be enough to stop climate change.

And most countries, including Britain, are not even on track for their Kyoto targets. Each day Britain emits four times the amount of carbon released in the Hemel Hempstead fuel depot fire.

We need to see emissions cut by 80 to 90 percent, and we need this reduction to come soon. Winning such a change will mean building a far bigger, broader movement.

Canada's cuts were not painless 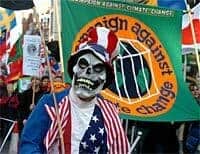 Storm of protests against Bush and Blair