The SSP has just come out of the most difficult three months in its seven year history. My first priority is to build on the conference and unite the party. We’ve built a solid reputation for uniting the left in Scotland—even our enemies would concede that.

The party is really chomping at the bit to get out and do what we do well—taking our unique socialist message and our commitment to an independent socialist Scotland to a wider audience.

We will be standing candidates in all 59 Scottish seats at the general election. That means raising £75,000 for the campaign.

These are, of course, first past the post elections, and therefore difficult for us to make a mark on. But the party is in really good heart and looking forward to the battle.

Well, we certainly will be mentioning the war—with its deceit, greed and murderous barbarity. And we’ll be linking up with Respect in England and Wales, holding out the same hopes for its success as we do for our own. 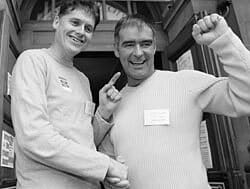