This article is over 12 years, 1 months old
Lecturers in 11 colleges and three universities were set to strike on Wednesday of this week—and those at other institutions are preparing to join the battle to save jobs and education.
By Sadie Robinson
Downloading PDF. Please wait...
Tuesday 04 May 2010

Lecturers in 11 colleges and three universities were set to strike on Wednesday of this week—and those at other institutions are preparing to join the battle to save jobs and education.

Jenny Sutton is a lecturer at the college of Haringey, Enfield and North East London (Conel) and a Trade Unionist and Socialist Coalition (TUSC) candidate in the general election.

She stood against education minister David Lammy in Tottenham.

“Conel management is stubbornly refusing to budge on the 29 compulsory redundancies it wants to impose,” she said.

“They are even refusing to negotiate directly with the UCU union. Instead they have sent a manager who is retiring to talk to the union. It’s a snub—and people are very angry about it.

“We’ve had good numbers of people volunteering to picket so we’re expecting a lively strike.”

Lecturers will join a march from King’s College Strand campus at 1pm on Wednesday.

Lecturers have made 5 May a day of action against cuts. And more action is planned after it. At King’s, lecturers will strike again on Thursday—election day—while UCL workers will begin a work to rule on the same day.

Lecturers are fighting against the government’s onslaught on education funding. Last week lecturers at Bradford College voted for strikes. They will be out on Wednesday of next week.

Laura Miles is a UCU rep at the college, where over 81 percent of those voting backed strikes.

“Management admits it has ‘saved’ £2.7 million of its £3 million target,” she told Socialist Worker. “Yet it is making workers compulsorily redundant in the Counselling, Metallurgy, English, Music Technology and Hairdressing departments.

“These ‘efficiencies’ are about creating a bigger surplus.” Students and workers planned to protest there on Wednesday.

Action has pushed some managements into backing off. But they cannot be trusted.

Lecturers at the University of Sussex struck at the end of last term against cuts. Bosses offered some concessions—only to backtrack on them a few weeks later.

“Management have offered negotiations that some people think are worth something, but they’re not,” one Sussex lecturer told Socialist Worker. “It backslid quickly last time.

“Management’s gameplan is to get us to think about technicalities rather than the big picture. We should throw everything we’ve got at them.

“We should declare more strike action to coincide with the exams.”

Further and higher education is under attack.

Last week, Middlesex University announced the closure of the Philosophy department. Around 100 people came to a campaign meeting on Friday of last week and thousands have signed a petition opposing the plan.

The assault on education will deepen after the election. The fact that a united fightback has begun is important. This must urgently spread to other colleges and universities. 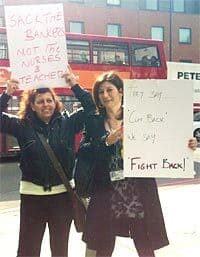