College workers reject ‘draconian’ plan to apply for own jobs

Workers at Lewisham and Southwark College in south London struck on Thursday and Friday of last week to defend jobs and education.

The UCU union members are fighting bosses’ plans to slash at least 120 jobs and close a college site in Camberwell.

Workers have to go through a lengthy, stressful process to apply for their own jobs.

UCU rep Brad Grisdale told Socialist Worker, “Management has made the process of getting our own jobs back worse. It’s draconian. But it has made this strike stronger.”

Lee Traquair, another UCU rep, added, “The strike has been a real big success.

“The numbers picketing have doubled or tripled compared to last time.

“I’ve noticed that a lot of people who were ‘floaters’ in terms of striking are on the picket lines.”

Strikers and supporters rallied at the Lewisham site on Thursday and at the Camberwell site on Friday.

They are furious because the cuts will hit vulnerable students, including migrants who want to learn English.

Striker Joe Wilkes told Socialist Worker, “The students haven’t been told anything. They don’t know if their course will be there or not next term.”

Kori Hutchinson was picketing in Camberwell. “Every day I walk into class and students say, ‘Is our class going to be here next term?’

Another picket added, “Students want to get qualifications and decent jobs. There’s no chance without English. The government complains about people on benefits. But how can people go to work if they’re not given a chance?”

UCU members struck again on Tuesday of this week—alongside six other London colleges.

During the action management at Conel announced that there will now be no compulsory redundancies at the college.

Strikers gathered in the middle of the day at Lewisham and Southwark College’s Southwark site and marched to the Department of Business, Innovation and Skills near parliament.

Workers at colleges that are already guaranteed no compulsory redundancies held lunchtime protests in solidarity. 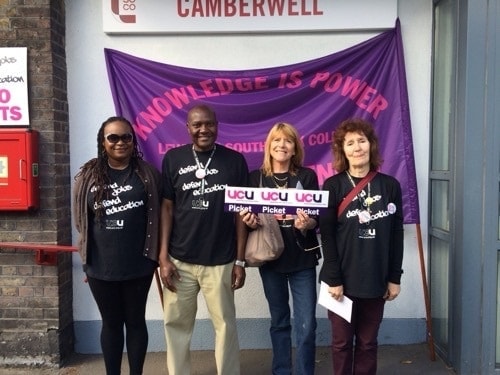