Colleges and universities: crisis and cuts threaten a generation’s education

This article is over 12 years, 10 months old
The recession is taking a big toll on further and higher education, as a programme of job cuts and course closures threatens the quality of education and choice of courses for a generation of students.
By Sadie Robinson
Downloading PDF. Please wait...
Tuesday 24 March 2009

The recession is taking a big toll on further and higher education, as a programme of job cuts and course closures threatens the quality of education and choice of courses for a generation of students.

One of Gordon Brown’s favourite mantras is that people need to retrain and reskill to deal with unemployment in the recession.

But the government refuses to make the investment needed to allow people to do this – and its cuts are making the situation worse.

University funds invested in stock markets had dropped £250 million in value by late last year following the collapse in the financial system. They are expected to fall even lower.

Universities that have reserves in the bank, and rely on these to generate income, have been hit as interest rates fall.

A number of universities had funds invested in Icelandic banks, whose dramatic crash last year piled on the losses.

Mark Haysom, head of the government’s Learning and Skills Council that has overseen the fiasco, resigned on Monday.

Colleges have been left with millions of pounds of debts.

Some institutions, such as Barnsley College in South Yorkshire, had already begun demolishing old buildings in preparation for the new ones.

Now a number of colleges could now face bankruptcy.

Underlying all of this is the increased marketisation of education, which forces universities and colleges to act like businesses and compete against each other for funding.

The higher education funding council for England (Hefce) has given 53 universities below-inflation increases for research and teaching for the year 2009-10.

Ministers instructed Hefce to ringfence some funding for science, seeing its development as providing a way out of the crisis.

This has hit institutions with strong social sciences and arts departments.

So the London School of Economics received a 13 percent cut in its research funding, while Reading university’s budget was slashed by £4 million.

The government is refusing to fund students with a qualification who want to study for an equivalent or lower-level qualification. This is leading to colleges cutting back on courses.

The funding changes make a mockery of the government’s claims to support lifelong learning and that people can simply retrain if they are made unemployed.

Instead of funding education properly, the government hopes to convince employers to do it for them, with plans for apprenticeships and workplace training programmes.

But employers are cutting back on training and investment in the recession. As the number out of work grows, it is becoming clearer that the government’s proposals fall far short of the mark.

At the same time as students and workers face the squeeze, the bosses are raking it in.

Reading University has votedto abolish its school of health and social care. Yet its vice-chancellor, professor Gordon Marshall, has had a pay rise of 8 percent. He gets £218,000 – above the national average of £194,000 for vice-chancellors.

The attacks on education are part of a wider attack on the working class. But they are fuelling bitter anger.

Education can be a key site of resistance to the government’s plans.

“If we don’t resist, further education will get whacked,” said Sean Vernell, a member of the UCU lecturers’ union’s national executive. “The government’s attacks will open up a divide, with poorer students getting a worse education.

“The attacks are a precursor of much bigger ones, which we will need to fight.

“The UCU has organised a conference and an open rally on Thursday of next week to discuss the fightback over education and jobs.

“Every trade unionist should come to the rally – we are all under attack and we all need to stand together,” said Sean.

Defend Jobs, Defend Education – No To Academic Vandalism, conference and rally organised by the UCU union at ULU, Malet Street, central London from 4 to 8pm next Thursday 2 April. Rally 6pm. For more information go to » www.ucu.org.uk

Resisting a swathe of education cuts in Liverpool 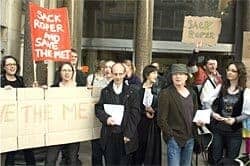 Seize the time at London Met after head quits