This article is over 11 years, 9 months old
Workers at eleven London colleges are balloting for strikes to save jobs.
By Sadie Robinson
Downloading PDF. Please wait...
Tuesday 13 April 2010

Workers at eleven London colleges are balloting for strikes to save jobs.

If the ballots are successful, lecturers will strike together on 5 May – the day before the general election.

The government is attacking further education and both Labour and the Tories say there are more cuts to come.

One lecturer from Richmond Upon Thames College told Socialist Worker, “Management are preparing for cuts and redundancies and this is by no means unique to our college.

“By striking together with colleges from across the whole region it will send a message to management that we’re not prepared to accept their cuts.

“The timing of the planned strike is significant.

“Coming a day before the general election it will serve as a warning towards the incoming government – we will fight to defend education.

“A one-day strike alone is not necessarily going to stop them.

“However, a successful yes vote and high turnout will show managements that any attempt to impose cuts will be met with resistance.

“We are prepared to fight for our jobs and our students’ futures.”

Labour has already cut at least £200 million from adult education budgets in colleges.

More than 1,400 jobs are under threat and the Association of Colleges estimates that more than 7,000 jobs are at risk.

The cuts will scar a generation of young people for years to come by taking away their chance to get an education. They are part of a wider attack on the working class.

The best response is for lecturers across colleges to unite to take action against the cuts.

Workers must go all-out to build the yes vote when they return to colleges next week.

UCU lecturers at Northumberland College have voted by over 90 percent for strikes to save jobs.

Over 99 percent of those who voted backed action short of a strike.

College bosses want to make 67 lecturers redundant and increase the workload of those who remain.

Over 68 percent of UCU union members turned out to vote in the ballot – an indication of the anger that exists over the planned cuts.

The union will now decide on what form of action to take.

It should use the mood to fight that exists among workers and call a series of strikes to save jobs – and aim to coordinate action with other colleges in dispute. 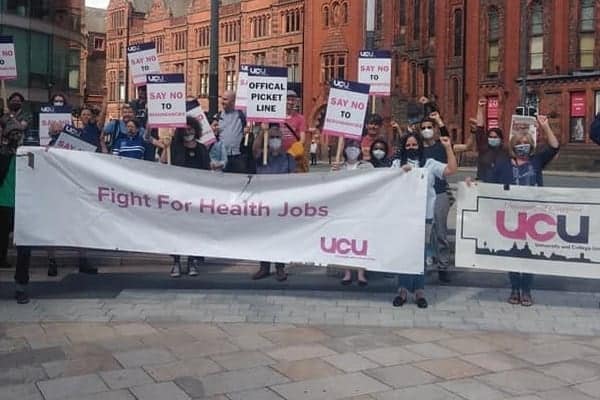 Save the Atherton Leisure Centre