Cop tried to sell hacking story to News of the World

This article is over 9 years, 0 months old
A senior cop tried to sell information on the phone hacking inquiry to the now defunct News of the World tabloid.
Downloading PDF. Please wait...
Tuesday 15 January 2013

A senior cop tried to sell information on the phone hacking inquiry to the now defunct News of the World tabloid.

She will be sentenced next month and could face jail.

Her solicitor asked the judge to take into account the fact that she is adopting a child when sentencing her.

News of the World reporter Tim Wood took the call from her. His email regarding the call to more senior colleagues was the main evidence against Casburn.

It read, “PHONE TAPPING. A senior policewoman… who claims to be working on the phone-tapping investigation wants to sell inside info on the police inquiry.

“She says the investigation was launched yesterday (Fri) by Yates and he is using ‘counter-terrorist assets’, which is highly unusual.

“An intelligence development team is being used and they are looking at six people.”

Casburn is the first person to be convicted of a crime relating to the phone hacking inquiry. 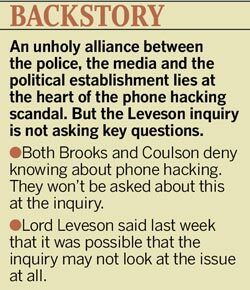 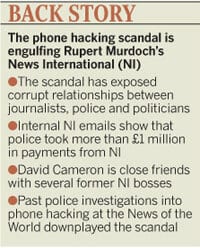 More News of the World links to the police