Cops break up families in search of racist Roma myth

This article is over 8 years, 2 months old
The scare about ‘child-snatching’ Roma people was based on nothing but racism, says Sadie Robinson
Downloading PDF. Please wait...
Tuesday 29 October 2013 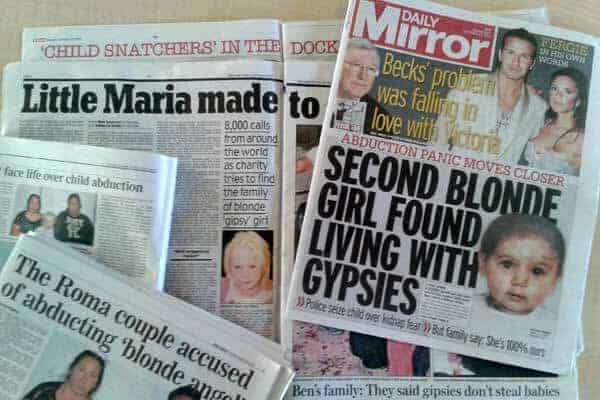 Police have snatched several children from Roma families in the past two weeks because they had blonde hair.

The two children in Dublin have since been returned to their families. One girl was put through a DNA test—which showed that the Roma parents she had been taken from were her biological parents.

DNA tests have shown that Maria has Roma parents too. Her biological mother said she gave the child to the Roma couple in Greece as she was too poor to care for her. Yet she now faces prosecution for “selling” the child.

Travellers’ rights campaigner Grattan Puxon told Socialist Worker, “Police believe a Bulgarian woman gave her child to the Roma couple. “So Roma are the saviours of the child, but they’re portrayed as child snatchers.”

A group from the anti-racist coalition Keerfa visited a Roma camp in Athens last Sunday. Kyriakos Banos, a journalist on Workers Solidarity, Socialist Worker’s sister paper in Greece, was part of the delegation.

He said the snatching of Maria reflects wider attacks on Roma. “There are 63 families living at the Nomismatokobeio site in Athens—around 400 people,” he said. “They have been there for 45 years yet still don’t have a legal right to be there.

“Now they are being harassed to leave because the municipal council wants the land for development.”

Roma people at the camp said 14 Roma settlements across Greece had been targeted by police or others in the past two weeks.

Kyriakos said, “Lots of Roma said it’s lucky this happened when the fascist Golden Dawn has problems.Many of its members have been arrested and they have a real problem mobilising on the streets.”

Around 2,000 people outnumbered the Golden Dawn on Saturday of last week, in its first attempt to rally in Athens since the arrest of its leaders in September.

Socialists and anti-racists in Greece are demanding that Maria be reunited with her adoptive family. They want the Roma couple who have been looking after her released from prison.

“We don’t want Maria put in an institution,” said Kyriakos.

The problems Roma face aren’t considered to be as newsworthy as the racist lies about them.

Siobhan Curran is a project coordinator for the Pavee Point Traveller and Roma Centre in Dublin. She told Socialist Worker, “We are concerned about Roma children’s rights. Many live in extreme poverty. We want governments to care as much about that as they have about these cases.”

Romany journalist Jake Bowers agreed. He told the BBC, “The shock is that a blonde child is being raised in a poverty-stricken, destitute environment.

“Yet there is no shock and no horror about the fact that there are millions of Romany children across Europe in ghettos.”

Grattan Puxon on a history of racism against Gypsies and Travellers bit.ly/1cZcjT0
Topics Anti-fascism, Anti-racism, Travellers