A police force has been made to launch an investigation into its officers after footage emerged of a man being beaten.

The footage shows a white cop hit a black man over the head eight times with an object believed to be a CS gas canister.

Other white officers restrain the man, meaning he cannot shield his head from the blows.

It shows a crutch strewn on the floor before one officer notices the incident being filmed and shuts the door.

West Midlands Police has said it is investigating. The case could be referred to the Independent Office for Police Conduct (IOPC), the cops’ pet watchdog.

Shariff Athman said he filmed the incident. “I had gone to visit my friend after he came back from his honeymoon and there was all this shouting and screaming over the road,” he said.

“I went over to investigate what was going on—there were some Turkish men outside.

“These days you can catch everything on camera so I turned it on and I was quite shocked at what I saw.

“The emergency services are people you think of to come and help and protect you. Of course they need to use reasonable force. But he was repeatedly hitting that man.

“Who knows what happened when the door was closed.”

Officers allegedly told Athman to “keep out of it”.

The footage is another example of police brutality and shows that institutional racism still runs through public bodies.

The Tories are using reports of knife crime to argue for more police and more powers for the police.

And, unfortunately, the Labour Party and many on the left have fallen behind calls for more police funding.

The solution is not more police.

Tommy Robinson due back in court

Tommy Robinson is set to be back in court on Friday of next week. The Nazi figurehead faces a fresh hearing at the High Court in London after a decision by attorney general Geoffrey Cox.

He is alleged to have committed contempt of court by filming outside a trial in Leeds.

Robinson was jailed for 13 months last May.

He was released on bail after the Court of Appeal quashed the findings against him and was due to face retrial.

Judge Nicholas Hilliard referred the case to the attorney general after two hearings at the Old Bailey court in London last autumn.

The Home Office should be stripped of its responsibilities over immigration policy, according to a new report.

The Institute for Government think tank warned that “an even bigger crisis than Windrush” could be coming over the European Union (EU) Settlement Scheme. The three million EU migrants living in Britain have to sign up.

It recommended setting up a new ministry to “meet the Brexit challenge on immigration”.

Immigration controls divide workers and make it harder to fight the Tories and bosses. 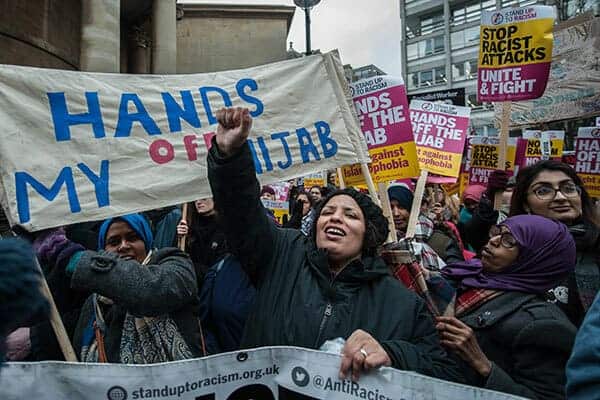