This article is over 9 years, 6 months old
Workers at the threatened Coryton oil refinery near Basildon, Essex, have called three emergency demonstrations for 1pm on Monday of next week.
By Dave Sewell
Downloading PDF. Please wait...
Wednesday 20 June 2012

Workers at the threatened Coryton oil refinery near Basildon, Essex, have called three emergency demonstrations for 1pm on Monday of next week.

More than 800 workers could be made redundant under plans to close Coryton and replace it with an oil-importing terminal running a much smaller workforce.

The Monday demonstrations are timed to coincide with the first redundancies kicking in.

In talks yesterday (Tuesday) the Department for Energy and Climate Change refused to support a bid to keep Coryton open as a refinery.

Workers held a loud and lively demonstration outside the talks demanding action to save their jobs.

Russ is now putting out a “clarion call” for protests at three oil sites next Monday—the Vopak terminal in Purfleet, Essex, the Grangemouth refinery near Edinburgh and the Lindsey refinery near Hull.

“Time is running out and we need to get as many people to these demos as possible,” he told Socialist Worker. “They are the only bargaining chip we have against the government.”

Russ Ball will be speaking about the dispute at the Unite the Resistance conference in London on Saturday. Go to uniteresist.org 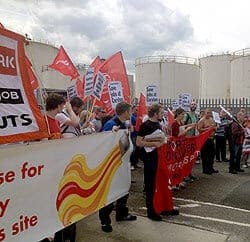 Coryton workers target Purfleet to save their refinery jobs