This article is over 15 years, 9 months old
The unofficial strike by around 50 construction workers at Cottam power station near Nottingham against the exploitation of migrant workers was set to enter its third week after workers rejected a new offer from management.
By Matthew Cookson
Downloading PDF. Please wait...
Saturday 18 March 2006

The unofficial strike by around 50 construction workers at Cottam power station near Nottingham against the exploitation of migrant workers was set to enter its third week after workers rejected a new offer from management.

Workers walked out after it was discovered that the sub-contractor SFL was employing Hungarian and Romanian workers on worse pay than the British workers. Nineteen British workers were then sacked, but other workers stayed out in solidarity, bringing work at the station to a standstill.

Hungarian workers who joined the Amicus union were then transferred to other jobs on the continent.

The united strength of the unofficial action forced management to make a new offer in an attempt to get people back to work. Bernard McAuley, an Amicus official, told Socialist Worker, “At a meeting last Friday management admitted that migrant workers had been underpaid, getting around £700 a month less than British workers. They agreed to repay those individuals. The British workers were asked to go back to work and sit in the cabin until a meeting on Friday, after which they would be redeployed. They would also be compensated for the time they were out.

“If workers hadn’t pursued this matter the company would have continued to exploit people and abuse those who joined unions, undermining terms and conditions.”

Unfortunately the offer wasn’t as good as unions had initially hoped. Frank Senior, a senior GMB union steward, told Socialist Worker, “There was no guarantee that everyone would get their job back. They wanted the scaffolders and laggers to go back to work straight away, without the reimbursement mentioned.

“There was no guarantee that the workers in the cabin would have a job at the end of the week. The original proposal was that everyone should be reinstated.

“So the strikers voted to knock this offer back to management and stay out. If there is no new offer there will be pickets at the gate and a mass demonstration. We need a guarantee that workers will be reinstated and future workers will be on the national agreement.”

This is an important battle for the trade union movement and the rights of migrant workers. Everyone should back the Cottam power strikers. 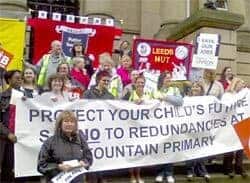