OVER 500 people attended a march and rally in the small town of Kirkintilloch, outside Glasgow, last Saturday. The demonstration was called by UNISON and supported by TGWU and EIS contingents in protest at savage cuts in jobs and services planned by the council.

OVER 200 people marched and chanted through Birmingham last Saturday on a Defend Public Services demonstration called by the local council workers’ UNISON branch. The protest united tenants, trade unionists, pensioners and others, and highlighted the Labour council’s plan to close down elderly people’s homes and privatise over 90,000 council homes.

OVER 150 angry council workers and residents demonstrated against cuts outside a meeting of City of York Council on Tuesday of last week. The New Labour council pushed through a 1.5 million package of cuts at the meeting, including cutting children’s services and sacking cooks from elderly persons’ homes.

SOME 30 parents and supporters lobbied Thanet District Council offices last Thursday over the closure of four pre-school nurseries and after-school groups. The nurseries were closed three weeks ago without warning, leaving many lone parents with no childcare, and staff without jobs. 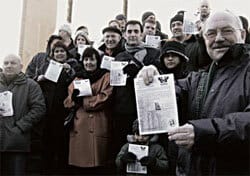 How to organise to beat global capital?