This article is over 11 years, 5 months old
Staff in Southampton libraries in Hampshire have called for a further two days of strikes to be held on Friday of this week and Monday of next week.
Downloading PDF. Please wait...
Tuesday 10 August 2010

Staff in Southampton libraries in Hampshire have called for a further two days of strikes to be held on Friday of this week and Monday of next week.

The Tory-run council plans to scrap the posts of seven full-time staff and replace them with volunteers.

It also plans to turn one branch library over to “the community” to be run solely by volunteers and to close another as part of a regeneration scheme.

Both libraries are in poorer areas of the city.

Following a well supported one-day strike in June, a further two-day strike was planned for July.

This was postponed after management began consultation with Unison union officials and issued a “revised” proposal.

Members have rejected this and continue to fight for the future of the library service and their jobs.

Around 800 GMB union members in Lancashire County Council are to ballot for action over changes to conditions and pay cuts.

Some 10,000 Unison union members in the council are currently taking action short of a strike, including an overtime ban, against the plans.

An “equal pay review” has cut wages for thousands of workers, and imposed worse terms and conditions. 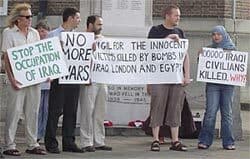 Campaigning for peace in Worthing