This article is over 18 years, 7 months old
UNISON MEMBERS in Newham council look set to get the go-ahead for an official strike ballot to fight the New Labour authority's attack on their union.
Downloading PDF. Please wait...
Saturday 17 January 2004

UNISON MEMBERS in Newham council look set to get the go-ahead for an official strike ballot to fight the New Labour authority’s attack on their union.

The east London council wants to evict the union branch from its office in a council building, and to reduce the number of full time branch officers from three to one.

Behind the attack is Newham mayor Sir Robin Wales’s desire to punish the Newham Unison branch for its very active role in the strikes to win an increase in their London weighting.

Just before Christmas Newham Unison members voted by 93 percent in a consultative ballot for action to defend their union branch. Last week branch officers got backing for an official strike ballot from regional union officials. A ballot is likely to begin in late January, and official action is therefore unlikely before mid to late February.

The council has previously given a deadline of 12 January to carry out the eviction and the removal of the branch officers. It now seems the council has wavered, and put off this move for at least a week.

That is a sign that a determined fight can force the council to retreat completely.

The union branch is also preparing to respond immediately if the council moves to carry out its eviction threat, with a mass picket of the union office. Many activists within the branch are also urging that any such move by the council be met by immediate walkouts.

Newham Unison branch secretary Michael Gavan told Socialist Worker, “We are glad to have won the support of the regional officials for a ballot on branch-wide strikes to fight this attack. We have called a meeting next Monday which we hope to use as a springboard into the ballot and to reiterate our call for a mass picket if the council tries to evict us.”

REFUSE AND street cleansing workers in Hackney, east London, have announced a five-day strike starting on Monday. Their employers, the Labour council, have arrogantly imposed new contracts and have now said they will not go to ACAS for talks.

Some workers could lose up to £3,000 a year under new contracts imposed by management just before Christmas.

John Perry, TGWU regional industrial organiser, says, “I requested that we go to ACAS but up to the very highest level the response from the council was that the contracts had been implemented and that was that.”

All the council unions must rally round the strikers. The refuse workers have always been one of the best-organised sections of the council workforce. If they win then it can lift the heads of every council worker. 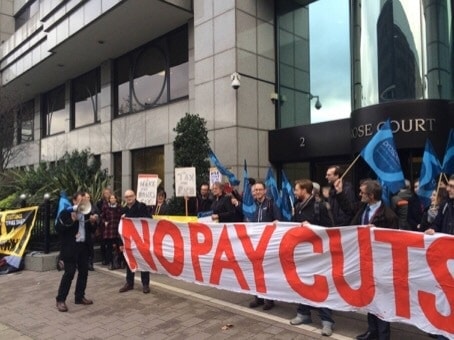