This article is over 18 years, 0 months old
THREE HUGE unions had set a deadline of Friday of this week for the government to back down over its pay insult to over one million local government workers. The government has offered a pay deal of just 7 percent over three years, with an orchestra of strings that will hit low paid workers.
Downloading PDF. Please wait...
Saturday 22 May 2004

THREE HUGE unions had set a deadline of Friday of this week for the government to back down over its pay insult to over one million local government workers. The government has offered a pay deal of just 7 percent over three years, with an orchestra of strings that will hit low paid workers.

The three unions, Unison, the TGWU and the GMB, have rejected the offer. Henry Rajch, a GMB branch secretary in Barnsley, told Socialist Worker, “The deal is a diabolical insult. Our members just don’t take it seriously. Two years ago, after our national strike, they got us to accept a deal based on having a national review of pay. The results have been very disappointing.”

Tony Staunton, a Unison branch secretary in Plymouth, told Socialist Worker, “People here are outraged at the government’s offer. Our stewards’ group sees it as a full frontal attack on the union. There is a mood to fight for pay. But people are also worried by the attitude of Unison nationally. They have rejected the offer, but they are dismissive of the idea of calling strike action quickly. People think the national union doesn’t want to rock the boat for New Labour. We are alerting our members about the need to prepare for industrial action.”

249 TO 44! That was the tremendous vote by striking Edinburgh nursery nurses last week to reject the latest offer from the council. The vote was all the more remarkable because it came in a postal ballot, where some might have expected the strains of ten weeks on strike to have an effect.

Helen, a striking nursery nurse, told Socialist Worker, “The ballot result is brilliant news and shows how strong our strike still is. The council thought that the postal ballot would work against us. We are continuing with our pickets and protests until the council listens to us. There is still great support from the public and from lots of parents. We haven’t come this far together to give up now.”

Gill Walker, another striking nursery nurse in Edinburgh, says, “Eighty strikers formed a human chain and blocked the traffic in Waterloo Place, a busy street in Edinburgh, for half an hour on Friday. Some of my colleagues who had been worried about doing it said that they found it really empowering. I was also one of 20 nursery nurses that got on Question Time in St Andrews last week. Disgracefully they refused any questions we put in directly on the nursery nurses, but I managed to raise the strike in the discussion on the media and ask why the media are ignoring a strike affecting thousands of Scottish children and the most important strike since the miners’ strike.”

Strikes continue in eight local authority areas as nursery nurses keep up the battle for the best possible local deal. Strikers in five areas-including Glasgow and Renfrewshire as well as Edinburgh-last week rejected offers which were considerably lower than those which some other authorities have agreed.

The strike remains active, a living reproof to the union leaders who called off the battle for a national deal at the beginning of this month. Glasgow strikers demonstrated in the city on Thursday of last week and planned to tour the Cardiff area this week raising solidarity.

The East Midlands Region of Unison last week agreed to donate £500 towards the continuing dispute following a motion from the Ashfield branch which has already agreed to send £100.

NEWHAM COUNCIL workers in east London will strike again next week in protest at the council’s union busting. We are holding a demonstration next Wednesday, the first day of our two-day strike.

The march is backed by London Region Unison, and we are appealing for Unison members from across the capital to join us. Dave Prentis, the leader of our union, has written to all union members encouraging them to support the strike for union rights.

We can beat Royal Mail 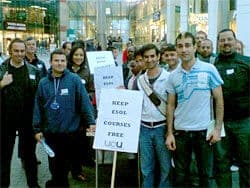 Protests around the country against Esol cuts