A Labour council is preparing to use a mass scabbing operation against striking bin workers.

The Unite union says the council is ready to pay agency bin-lorry drivers more than the hourly rate which they are refusing to pay striking drivers in their regrading dispute.

A company wholly owned by the council is trying to recruit temporary refuse drivers in an attempt to undermine the strike.

Recruitment agency AFE Recruitment wants to hire temporary “dustcart drivers” in the Coventry area. The ad says they would be working for a “private recycling company”. But the workers would be employed by Tom White Waste Ltd. It boasts on its website that it is a “family-run business” but in fact is wholly owned by Coventry council.

The agency workers recruited for Tom White Waste are being offered between £18 and £20 an hour. The striking refuse bin collection drivers are paid between £11.49 and £14.37 an hour.

The union’s regrading claim would take the rate to between £14 and £17 an hour. The advert also says, “This role becomes permanent after 3 month contract ends”. Does that envisage fewer of the present workforce?

Tome White Waste opened up a drop-off site for rubbish earlier this month. 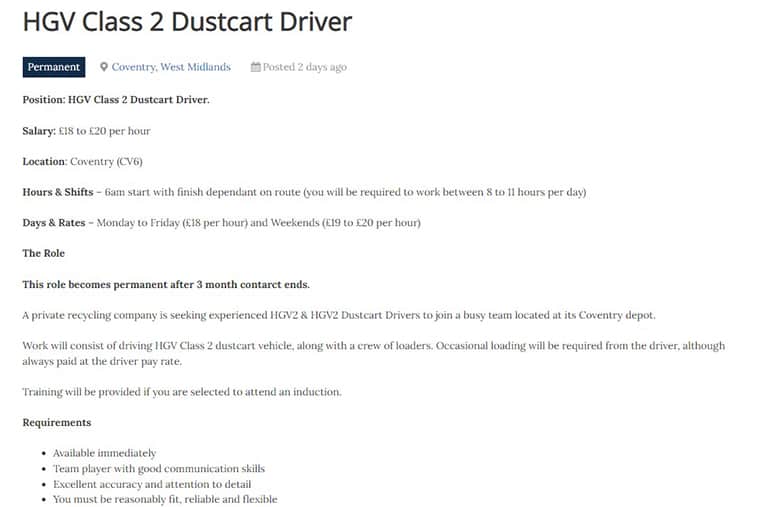 The advert for workers to undermine the strike

“Coventry City Council are claiming that Tom White is a contractor—in fact, it’s a company that Coventry council owns 100 percent.”

In a recent meeting with the council leaders, the Unite reps asked about the council’s relationship to the company.

“We left it to the end of the discussion,” Mick said. “The chief executive was very blase and said, ‘Very good thank you.’

“It’s disgraceful that this is from a Labour council—it goes against all its principles. Many of the council leaders are in trade unions, but that doesn’t seem to have changed the way they’re attacking trade unionists.”

Mick also said that the council has set up dump sites, with hired security from a contractor. The security staff are paid £14 in the week and £28 on a Sunday.

“This is the extent the council is going to in order to defeat the HGV drivers. It thinks it can beat us with underhanded tricks.”

But despite the outrage, “morale is high” among the strikers. “They are determined to get their rates of pay increased to reflect the market rates,” Mick added.

“Donations are coming in from all over the country and we’ve had strong support all the way up to Unite general secretary Sharon Graham.”

Strikes involving 70 refuse collection drivers began earlier this month in a dispute over low rates of pay. From Monday the drivers will move to all out strike. The agency drivers are expected to begin work on the same day.

It’s a disgusting piece of strike-breaking. But it’s entirely in keeping with the council’s anti-worker attitude throughout the strike. And the council’s chief executive pockets nearly ten times what a bin worker earns.

Unite West Midlands was right to say that workers have been “betrayed” by a Labour council.

Unite regional officer Simon O’Keeffe, said, “Rather than seeking a resolution to end the strikes and address low pay of refuse collection drivers in Coventry, it now appears that Coventry council is intent on setting up an alternative refuse collection service.

“Coventry council needs to withdraw its plans and to make a decent offer to the workers to end this dispute.”

Everyone should support the strikers and make sure they can win their full demands.

And the union should organise mass pickets of AFE Recruitment and Tom White Waste and try to shut them down.