Nader was right to stand

THE OUTCOME of the US election was hanging in the balance as Socialist Worker went to press. Not only was official politics in turmoil, but millions of ordinary people began to question the whole US electoral system. One side of this anger expressed itself when students occupied Florida’s state building last week. Thousands of black people attended angry rallies over harassment at polling stations.

The votes between Republican George W Bush and Democrat Al Gore were neck and neck. The knives were quickly out for Ralph Nader, the Green Party candidate in the election. Nader won 3 percent of the poll, some 2.6 million votes, including nearly 100,000 in Florida.

In ten states Nader won 5 percent or more, and in Alaska he won 10 percent of the vote. Democrats said Nader cost them the election, and that he was on a “windmill-tilting excursion”. In Britain the left Labour weekly Tribune said, “Whatever form of torture that the Bush administration and its Congressional allies inflict on America and the world for the next four years can be blamed directly on the Nader campaign.” These attacks are a disgrace.

Nader was not to blame. The election was so close because of Al Gore’s record. Eight years of Democrats in the White House have left working people and the poor worse off than they were under Republicans Reagan and Bush. The Democrats have demolished welfare and thrown millions into poverty. The Clinton/Gore welfare “reform” bill of 1996 smashed 60 year old welfare programmes for the poorest, abolished the Aid to Families with Dependent Children programme and devastated services with a $54 billion cuts programme. Some 1.1 million children were plunged into poverty as a result. Clinton and Gore massively expanded prison building and the use of the federal death penalty.

With Clinton and Gore in the White House US troops have been used around the world more times than under presidents Ford, Carter, Reagan and Bush combined. One year into Clinton/Gore’s first term Treasury Secretary Lloyd Bentsen bragged, “Who would have expected a Democratic administration to propose cutting 252,000 jobs over the next five years and bringing that one about?” Disappointment with Clinton and Gore led to the Democrats being routed in the 1994 Congress elections, handing the Republicans control of both houses of Congress for the first time in 40 years.

Some say Gore will at least defend abortion rights, unlike Bush. But over the last eight years the Democrats have overseen the placing of restrictions on abortion rights in many states, including bans on late-term abortions.

It is now twice as hard to get an abortion in the US than when Clinton took office. One study found that women in some 86 percent of US counties today have no access to abortion services. Nader was right to stand up and criticise a system that has seen big business bankroll both major parties to make sure it got its way.

“You can’t spoil a system that is spoiled already,” says Nader, and he’s right. Nader brought a breath of fresh air to the US elections that inspired millions-including some of those who voted for Gore. Nader’s campaign signified a huge step forward which has laid the basis for future left challenges, and for a break-up of the two-party system. The campaign put the anti-capitalist spirit of Seattle on the agenda. It should be applauded by everyone who wants change.

MANY WERE scared into voting for the Democrats because they feared the Republicans would shift the US Supreme Court to the right, and that it might then outlaw abortion. But some of the Republican-nominated judges in the Supreme Court have more liberal voting records than those nominated by the Democrats. The original ruling legalising abortion in the US was written by a Republican. Republican judges did not outlaw abortion in the 1980s and 1990s because they knew it would provoke a social explosion.

The two judges on the Supreme Court with the worst voting records today were unopposed in the Senate by the Democrats. For one of them the vote was 98 to nil.

RALPH NADER has been fighting powerful corporations since the 1960s. In 1965 he wrote Unsafe at Any Speed, a best-selling book exposing the car industry’s criminal neglect of safety, particularly General Motors. GM and others tried to discredit Nader, hiring private detectives to follow him. Nader sued for harassment and used the money he won to set up a movement for consumer rights and safety.

“Nader’s Raiders” have fought, and often won, laws to regulate the unsanitary conditions in the meatpacking, poultry and other industries. Nader has exposed how the trucking industry forces drivers to work long and unsafe hours, and he has fought to improve working conditions of miners. Nader was at Seattle last November to protest against the World Trade Organisation, and at the Washington protests against the IMF and World Bank. Earlier this year he joined the picket lines of striking Verizon workers who were fighting for union rights, and better wages and conditions.

Standing up to the 'blame culture' at Castrol 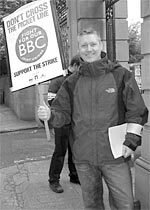 BBC jobs plan is an assault on public broadcasting

The Tories are a party of lobbyists 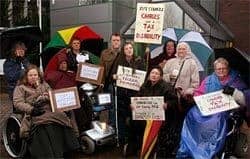