“IT’S CRUNCH week for the dispute. How is the union going to respond? The only way is to name the day for more Scotland-wide action involving all our members.” That was how one worker in Inverclyde council summed up the situation this week facing tens of thousands of Scottish council workers who are fighting for a decent pay rise.

The COSLA Scottish councils employers’ body is telling the 32 local authorities to impose a 3 percent pay deal that has been overwhelmingly rejected by members of the UNISON union. The move is a direct challenge to the union.

“I’m personally appalled at the decision to impose a pay settlement,” says East Dunbartonshire UNISON branch secretary Jim Burnett. “It must call into question the whole negotiating machinery. It will only harden the resolve of our members.”

“It’s a direct provocation,” says a Glasgow council worker. “There is real anger among the people I work with and they are looking to the union to respond.” The potential for a fight to beat the employers has been shown by the three solid national one-day strikes by UNISON’s 80,000 Scottish council members. Some 1,300 workers across 26 of Scotland’s 32 councils are now on all-out strike.

And other action so angered Dundee council it threatened to use anti-union laws against workers. Unfortunately, union leaders backed off in the face of this threat, and they were locked in talks at ACAS last week and again this week.

The danger is that the result of any such talks will be a shabby compromise rather than the clear victory which is possible if the strikes are stepped up. The union leaders have not yet named another date for national action. Workers must force them to organise Scottish-wide strikes.

THE RESULT of the ballot for strike action by workers at Luton airport was due out at the end of this week. Some 400 workers-support staff, security guards, cleaners, fire officers, car park attendants-are voting for action to fight a “restructuring plan” that will slash their wages.

The company wants to “become more competitive”. It wants to impose pay cuts on workers of anywhere between 2,000 and 12,000 a year. Already a consultative ballot has produced a 96 percent vote for strike action.

Lansley not having a very Nice time 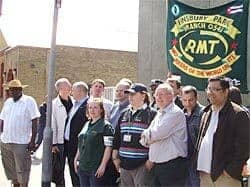