Daily Record and Sunday Mail workers step up their fight

This article is over 12 years, 8 months old
Members of the NUJ journalists’ union at the Daily Record and Sunday Mail newspapers in Glasgow are stepping up their fight against job losses with a 72-hour strike.
By Penny Howard
Downloading PDF. Please wait...
Tuesday 21 April 2009

Members of the NUJ journalists’ union at the Daily Record and Sunday Mail newspapers in Glasgow are stepping up their fight against job losses with a 72-hour strike.

The workers are set to strike from Friday of this week until Sunday.

This action follows 48 hours of strikes that took place on Friday and Saturday of last week. It will be the fourth week of action at the newspapers.

An indefinite work-to-rule remains in force against 70 compulsory redundancies.

Spirits were high at a 100-strong mass picket and rally in the city on Friday of last week.

Norman Silvester, the father of the chapel (workplace union branch rep) at the papers, described the cuts as “draconian”.

They will affect a third of the workforce. The NUJ has presented a compromise proposal involving voluntary redundancies but so far management has not entered negotiations.

Management has implemented a pay freeze. It wants to introduce an increase in the working week without extra pay and significant cuts to pensions.

Silvester said, “We have been inundated by messages of support from across the trade union movement.

“There are two NUJ chapels that have pledged financial support. Our dispute seems to have caught their imagination.”

The redundancies and the effect on Scotland’s media of the merging of the two newspapers is being discussed across the country. They were debated at the Scottish TUC conference and in the Scottish Parliament this week.

The NUJ Left group held a Stand Up for Journalism comedy night last week, which raised almost £700 for the strikers. A similar event is planned in Glasgow.

Trinity Mirror made £145 million profits in 2008 with the Daily Record and Sunday Mail making healthy profits.

Peter Murray, the NUJ vice-president, explained, “Revenue for many newspapers has decreased but the shareholders still want to get the same profits as before the recession.

“Many media companies are cutting staff so that they don’t have to cut their profit margin.

“But this will result in lower-quality newspapers and reduced readership.

“It is a short-sighted strategy, which means both the public and journalists will lose out.

“It is likely that there will be more strikes involving NUJ members in the coming months and we will need the support of every trade unionist to protect jobs and media quality.”

The NUJ is asking for donations to be split between the disputes at Glasgow and the one at the Yorkshire Evening Post, where there is also an ongoing battle over job losses.

Donations for the Record and Mail dispute can be sent to the “Alan Hutcheson Fund” at NUJ Scotland, Third Floor, 114, Union Street, Glasgow, G1 3QQ. Email messages of support to [email protected] 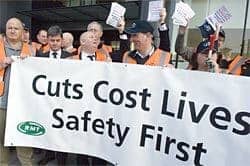