Damage is done by this chaotic system

Damage is done by this chaotic system

BANKERS AND stockbrokers around the world held their breaths this week and hoped the major money markets would not fall over the edge of a cliff. Even mainstream newspapers like the Observer have shown the sense of panic, with headlines like “A Week Of Market Madness”.

“The danger is that it could yet turn into the crash of 1929, which heralded the horrors of the Great Depression,” was one of the dire warnings. Only a year ago many economic commentators were predicting that a “new economy” based on the internet and high technology would lead to permanent economic growth to the eventual benefit of all.

Now those technology companies’ profits and shares have plummeted. The collapse shows exactly what is wrong with capitalism. It is a chaotic system. Investment is not planned to meet need, but is ploughed in to make a profit. Those in work have to work longer hours while colleagues are sacked.

Unsold goods sit alongside workers thrown on the dole. Yet this is the market system that New Labour and the mainstream parties say must dominate health, education and every area of the economy. No one knows when or how sharply the world economy will slow down, least of all the financiers and politicians. We do know that people are already suffering. That is why everyone should throw themselves into building the widest possible resistance and arguing for an alternative to the market in the run-up to the general election. 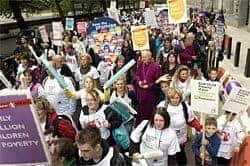 Thousands march to demand an end to child poverty