Dave took construction giant Carillion to an employment tribunal after he was blacklisted because of his trade union activities.

Carillion admitted that two of its subsidiaries had used blacklisting services from the Consulting Association firm.

But Carillion argued it was not liable because Dave was employed by an agency.

The employment tribunal accepted this argument at a hearing in January. But the full judgement is damning.

It reads, “We reached our conclusion with considerable reluctance.

“It seems to us that he has suffered a genuine injustice and we greatly regret that the law provides him with no remedy.

“We hope that he can take some comfort from the fact that the wrongdoing of which he complains has been exposed and punished and legislation passed designed to protect others from the misfortunes which he has experienced.”

Dave discovered that the Consulting Association had compiled a 36-page file on him. The Association was shut down in 2009 after a raid by the Information Commissioner’s Office.

The judgement describes much of the information on Dave’s file as “sensitive” and “assembled over a number of years”. Much of it was wildly inaccurate and used to smear Dave.

Its managers attended regional meetings and were significant contributors to the costs of the Association.

Evidence in Dave’s case confirmed Socialist Worker reports that the blacklist went wider than construction workers and that police supplied some of the information on it.

“The decision sums up by saying that, as an agency worker, I have no protection under UK law. We need to change the law. That’s why we are going to fight this all the way.”

Electricians at Balfour Beatty vote by 81 percent to strike 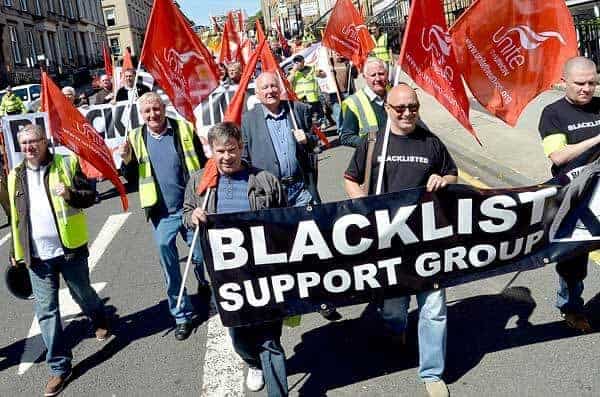