Construction workers and supporters have protested across against blacklist on a TUC backed day of action.

Protests were held outside the offices of major construction firms and the Scottish Parliament.

In the Cheesegrater tower in the City was the focus for an anti-blacklisting demonstration from early morning.

Unite says that Laing O’Rourke has barred its representatives from both the Cheesegrater and the Francis Crick laboratory site in Kings Cross.

At both sites workers blocked the road to the annoyance of the police.

In Glasgow members of Unite, the GMB and Ucatt and picketed outside a Robert McAlpine building site in Renfrew Street and a second in Renfield Street.

There were also protests , Hemel Hempstead, , and .

In 30 protesters picketed the offices of McAlpine’s.

Former victimised worker Sandy Fergusson and national rank and file committee member Pete Shaw were both knocked to the ground by private security. The incident occurred as they tried to enter the PCS offices which share the building with McAlpine.

Pete who has a suspected heart condition was then advised to go to the nearest hospital. He is said to be well but furious.

Rob Morris from Ucatt, said, “This was an appalling incident and was totally unnecessary.

“This was an entirely peaceful and good natured protest and for security to act in this way is reprehensible.”

At a lobby of Parliament TUC general secretary Frances O’Grady said, “Blacklisting is real. It has ruined thousands of lives.

“We need a full inquiry into its scope. It must have the legal power to call witnesses, seize records and put employers on the spot.”

She suggested that the proposed Tory inquiry into unions was “a cheap electoral stunt set up in response to a non-existent problem, a taxpayer-funded initiative devised to generate a union-bashing headline or two for the Conservative election campaign.” 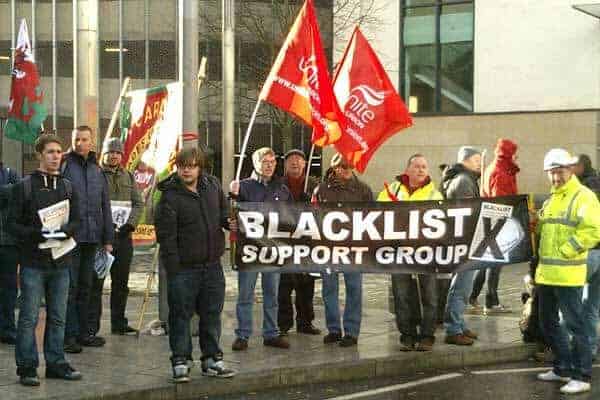 Photos of blacklisting day of action on 20 November 2013