This article is over 13 years, 0 months old
Hundreds of people took to the streets of the Isle of Wight yesterday as part of a national day of action as part of the campaign to save jobs at the Vestas wind turbine factory.
Downloading PDF. Please wait...
Thursday 13 August 2009

Hundreds of people took to the streets of the Isle of Wight yesterday as part of a national day of action as part of the campaign to save jobs at the Vestas wind turbine factory.

In the morning, around 100 activists spread themselves out to the four corners of the Isle of Wight – the town centres of Newport, Cowes, Ryde and Sandown – where they gathered thousands of signatures for a petition to save the factory.

And in the evening another 100 came together for a rally and march around the second Vestas factory in Cowes, which is the site of an ongoing rooftop protest.

The day showed that, despite the end of the workers’ occupation at the Vestas plant in Newport, the campaign to save jobs is gathering momentum.

Former Vestas occupier Mark Smith told Socialist Worker, ‘The campaign is still growing. There are workers here today who I haven’t seen at any of the rallies before.

‘We’ve got workers speaking all over the country today but there are still lots here. We organised this day really quickly and it’s been very good. Hopefully the next one will be even bigger and better.’

The workers have now formed a committee to co-ordinate the continuing campaign. It has called a second national day of action for Wednesday 9 September.

Meanwhile solidarity with the Vestas workers continues to grow in towns and cities across Britain.

Around 50 people came to a solidarity meeting called by the PCS civil service workers union in London yesterday. People protested outside the Department for Energy and Climate Change in the evening.

In Oxford around 30 people attended a solidarity protest called by the Oxford and District Trades Council. They handed out leaflets, petition and collect money for the campaign.

Around 70 people attended a Fight for the Right to Work public meeting with Vestas and Johnny Walker workers employed by Diageo in Glasgow on Tuesday evening.

Richard Chandler, a Vestas worker, got a standing ovation when he spoke of the need to fight for jobs and not take cuts and closures lying down.

Diageo workers, who traveled from Kilmarnock by minibus following a local Fight for the Right to Work meeting, said they would intensify the campaign to force the company to stand down.

Maggie Farrel, an unemployed teacher, Duncan Smith, Chair of Ediburgh City Unison (personal capacity) and Brian Christopher from the Fight for the Right to Work committee also spoke, reflecting the breadth of attacks we face and the possibilities for resistance.

Workers discussed various disputes and how they could win action in their own workplaces.

One worker told Socialist Worker that the meeting was “very inspiring and I hope it encourages other workers to fight back”.

His message to workers facing attacks was: “Dont be afraid to take on the employer and the system”.

After the event Richard from Vestas said, “I was inspired by the meeting. I didnt know what to expect at first, but listening to other people fighting their own fights shows you that you’re not alone, even if you feel downtrodden all the time in your job.

The meeting raised £163 in donations and pledges to support the Vestas campaign.

Ending with a focus on action, Brian Christopher said, “Now is the time to fight back. Lets build a network accross Glasgow and Britain which has the power to push back the agenda of the bosses in favour of decent jobs, public services and education.

“Let’s fill coach after coach for the Labour Party demonstration in Brighton on 27 September.”

Vestas: the fight for jobs goes on 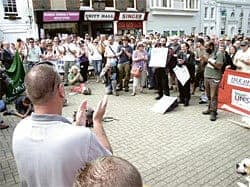 Vestas occupier: ‘We need a system that is based on the needs of people’

Vestas: green jobs battle is on