This article is over 10 years, 11 months old
Students have returned to their campuses rejuvenated after successful demonstrations in London and Manchester last month.
Downloading PDF. Please wait...
Tuesday 08 February 2011

Students have returned to their campuses rejuvenated after successful demonstrations in London and Manchester last month.

At Glasgow university, students have occupied a disused postgraduate centre, Hetherington Research Club, and turned it into a centre of resistance.

Banners hang at the front of the building saying “Occupied” and “Welcome to Free Hetherington”.

They have linked the national campaign against cuts to the local demands to re-open the building.

The students have been in occupation since 1 February.

Over a hundred students pass through the occupied building each day, where the occupiers serve free lunches and hold meetings.

The UCU union branch secretary has visited the occupation along with other union members.

Students have pledged their support for any industrial action by lecturers.

Students and education workers are gearing up for another national day of action against Tory education cuts—Day X4.

On Thursday 24 February, protests, sit ins and occupations will take place across Britain.

In London, people will march on Universities UK—the organisation of vice-chancellors from the most elite universities in Britain.

The UCU union’s London region is backing the demo.

On 17 February, activists from London, Oxford and across the south of England will be descend on the elite Eton College.

The National Assembly for Education, the Education Activist Network (EAN) and others are backing Day X4 and the Eton protest.

Mark Bergfeld, from EAN and the NUS national executive, is standing for president of the NUS in the upcoming elections, and Ruby Hirsch is standing for the vice-president FE position. They are standing as part of a slate with other left candidates. Go to http://educationactivistnetwork.wordpress.com

Twelve students from the University of Birmingham face disciplinary charges after taking part in an occupation.
Sign the petition to defend them at www.ipetitions.com/petition/defendbirminghamstudents 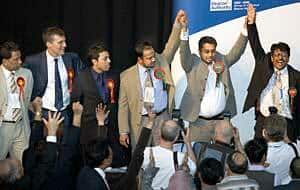