This article is over 15 years, 6 months old
A packed meeting of south west Birmingham Respect took place on Tuesday of last week, in order to select a candidate for the May elections.
By Andy North
Downloading PDF. Please wait...
Saturday 03 February 2007

A packed meeting of south west Birmingham Respect took place on Tuesday of last week, in order to select a candidate for the May elections.

The Moseley & Kings Heath ward is likely to be a key battleground at the next general election. A strong vote here will be needed to back up the larger Respect votes in inner city wards if Respect is to gain an MP in Birmingham.

The meeting took place in the wake of the selection of six other candidates. Concern had been expressed that all of these six were men.

The two people putting themselves forward as candidates were Yasir Idris, a recruitment consultant and former amateur boxer who lives in the ward, and Helen Salmon, an active member of the local committee of the Stop the War Coalition.

Helen had been approached by leading figures in Birmingham Respect to put herself forward for this ward, in which the black and ethnic minority community forms around a third of the population.

However, in the wake of Yasir’s nomination there was a large increase in the number of Respect members in the ward. Around 60 people joined in the two days leading up to the meeting.

Helen is an extremely strong candidate. She was on the national executive of the NUS and was instrumental in forming the Student Stop the War Coalition. She is the activities organiser of Stop the War in Birmingham.

Helen has been part of Respect’s leadership in Birmingham. She has worked on Salma Yaqoob’s election campaign in Sparkbrook, Salma Iqbal’s campaign in Springfield and built Respect groups in universities around the West Midlands.

Yasir was selected as the candidate by 35 votes to 20, meaning that all seven candidates in Respect’s target wards are male.

The issue of equality has been one that Respect has given prominence to in the past, with a diverse selection of candidates for both the European election in 2004 and last year’s council elections.

There is evidence that Respect’s most spectacular successes in Birmingham owe a great deal to the enthusiastic support of women in particular.

Respect members in Moseley & Kings Heath ward will fight to give full support to Yasir, who is an energetic and enthusiastic candidate.

But it is clear that the selection procedure in Birmingham will need careful re-examination to see if it has lived up to the organisation’s aim of being a representative and inclusive coalition. 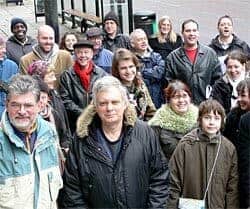