This article is over 12 years, 6 months old
Around 50 media workers met in the National Union of Journalists (NUJ) headquarters last week to discuss how best to respond to the threat of the Nazi BNP.
By Esme Choonara
Downloading PDF. Please wait...
Tuesday 23 June 2009

Around 50 media workers met in the National Union of Journalists (NUJ) headquarters last week to discuss how best to respond to the threat of the Nazi BNP.

After a series of short introductions from leading NUJ members and Weyman Bennett of Unite Against Fascism (UAF), a debate opened up about the pressures facing journalists and broadcasters in light of the election of two BNP members to the European parliament.

While many of those attending the meeting held differing attitudes to questions of free speech and tactics for the anti-fascist movement, there was unity about developing a strategy to give support and confidence to anti-fascists and anti-racists inside the industry.

There was also agreement that a number of journalists, on local papers in particular, have done excellent work exposing the BNP’s fascist politics.

Eileen Short, a former Tower Hamlets council PR officer who helped organise a campaign to expose and isolate the BNP’s first elected councillor Derek Beackon brought some useful experience to the meeting. She pointed out the key test for journalists should be to ensure that they are not being used to spread BNP propaganda.

A Bectu union member raised the importance of defending media workers who refuse to work on racist or fascist material.

An NUJ member from a national newspaper pointed out that there are important editorial discussions happening about terminology and coverage of the BNP—and argued that the union has to intervene in these debates.

Several activists raised the fact that cuts at local papers put increasing pressure on journalists to produce a lot of stories while there are cuts into time for research and investigation.

In light of this the meeting agreed to set up a website where journalists could access useful and legally-sound information to help expose the BNP, as well as guidelines over reporting on fascist organisations.

The meeting agreed that the NUJ should make a clear statement on its position on countering racism in the media as well as updating and publicising its guidelines on race reporting.

The NUJ is to host a conference on reporting the BNP in Manchester on 27 July.

Weyman Bennett pointed out how the local paper in Stoke had changed its tone towards the BNP after the 20,000 strong Love Music Hate Racism festival in the town last month.

For more go to » www.nujleft.org 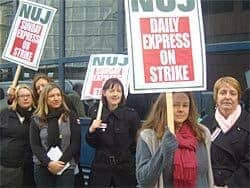 Express strike called off for talks