THE AIDS crisis has exploded most terribly in highly indebted countries.

SOUTH AFRICA is the country facing the most immediate AIDS crisis. Over 4 million people there are living with HIV or AIDS. AIDS spreads in the hellish communities of the South African mines and similar migrant labour areas.

Men live in industrial barracks, hundreds of miles from their families, doing exhausting and terrifyingly dangerous jobs. Poor women in these areas survive by becoming prostitutes.

Life is cheap, drunkenness the main relaxation, hope in short supply. This is the reality behind the glittering diamond adverts, the lustre of gold and the profits of companies such as Anglo-American.

President Mbeki of South Africa has failed to tackle the emergency. He should be telling the drug companies that South Africa will copy their treatments and that they can go to hell if they want their cash. What company would dare to protest if Mbeki asked Nelson Mandela to go on world TV and make the case for saving so many lives? Instead Mbeki acts as a model capitalist and dredges up discredited theories about AIDS to cover his failures. Mbeki revels in praise from the World Trade Organisation, the international bankers and the multinationals.

At a recent press conference to launch a new programme of cuts and privatisation, Mbeki was asked if he was a neo-Thatcherite. “Just call me a Thatcherite,” he replied.

Mbeki says his aim is to create a “black capitalist class” and that it is unfortunate that “because we come from the black oppressed many of us feel embarrassed to state this goal as nakedly as we should”. Mbeki’s grovelling to capitalism has already been disastrous. When AIDS is the issue it means clearing the way for mass murder.

SIX GIANT drug companies manufacture the AIDS drugs that could save millions of lives. Their profits last year were:

Peter Piot, director of the UN AIDS programme, says that 2 billion a year is needed to stop total devastation in Africa. 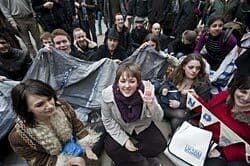 Liberals are not better