This article is over 12 years, 6 months old
After his humiliation over privatisation, Lord Mandelson now wants to unleash a further attack on postal workers – he wants to slash their pensions.
Downloading PDF. Please wait...
Tuesday 07 July 2009

After his humiliation over privatisation, Lord Mandelson now wants to unleash a further attack on postal workers – he wants to slash their pensions.

Mandelson says that without the sell-off, the government will not cover the scheme’s £3.4 billion deficit. A revaluation now underway is expected to show a deficit of up to £10 billion.

Now the chair of the fund’s trustees says she is considering closing the scheme to existing members and forcing them to join a new one with much lower levels of benefit.

Tragically, the leadership of the CWU union failed to put up any fight over the issue, despite winning a massive vote for action in a consultative ballot.

It is essential that the union does not repeat this performance. It is not postal workers who have caused the crisis, it is Royal Mail. For almost two decades the company decided not to make payments into the fund, and instead take a “pensions holiday”.

Activists in the CWU union rightly insist that as the company is state-owned, the government is responsible for any debts in the pension fund.

“We should use the momentum built for this week’s strikes to start a massive campaign to force the ministers to honour their commitments,” says Micky Rowell, a CWU rep in east London. 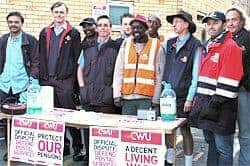 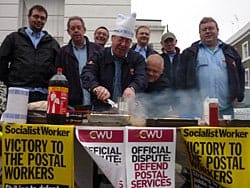