The 24-hour walkout by Defence Support Group (DSG) workers is part of a rolling programme of national action for better pay.

The defence workers’ strike follows action taken the previous Thursday at MoD bases in Donnington near Telford and Sealand in north Wales.

Sites at Bovington, Warminster and Colchester plan to walk out this week.

The Unite union members are demanding an 8 percent pay rise from the rich company which has cash reserves of £65 million.

Workers at the Donnington base sent a message of support to striking colleagues in Catterick and Stirling saying, “We’re with you all the way.”

The DSG workers are also fighting plans to sell off the company which has a national workforce numbering around 2,800.

Unite national officer for the MoD and government departments Mike McCartney said that more action would be called unless bosses responded to the workers’ demands.

“Further industrial action, beyond what has already been announced, is on the cards, unless the management gets around the table to negotiate in a constructive and positive fashion.” 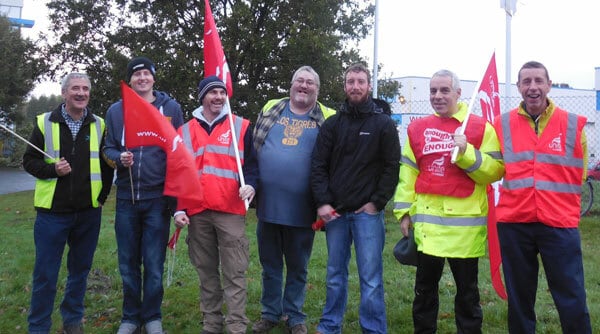