This article is over 15 years, 8 months old
The battle over the future of the local government pension scheme (LGPS), which saw up to 1.5 million workers strike on 28 March, is far from over.
Downloading PDF. Please wait...
Saturday 13 May 2006

The battle over the future of the local government pension scheme (LGPS), which saw up to 1.5 million workers strike on 28 March, is far from over.

Instead of calling further action the union leaders accepted a deal to hold further talks and use half the savings from winding up the “rule of 85” to protect present LGPS members.

The rule of 85 says some workers can retire at 60 if they have 25 years service.

The anticipated staging posts for the talks were:

Nobody among the rank and file membership is certain quite how far this timetable has been adhered to – or whether it is now collapsing. Next week the Unison union’s local government service group executive meets and more news may be forthcoming.

Some union leaders are already saying that the need to protect present LGPS members has to be balanced against benefits for future members – an acceptance that cuts are inevitable and the pain needs to be shared.

Local government workers should redouble their efforts to demand a return to a fighting defence of the LGPS. 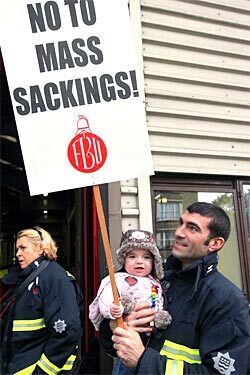