This article is over 15 years, 1 months old
There were large and lively pickets at most of the Metroline bus garages. Around 60 strikers joined the picket lines at Potters Bar and 50 at Holloway.
Downloading PDF. Please wait...
Saturday 25 November 2006

There were large and lively pickets at most of the Metroline bus garages. Around 60 strikers joined the picket lines at Potters Bar and 50 at Holloway.

Many union members reported that the strike was stronger than the one held the previous week. In Harrow, some 30 strikers joined the picket line whereas only four picketed last week.

More than 50 strikers joined the picket line at Willesden. A T&G shop steward at the garage said that no buses left the garage on Monday, in contrast to last week’s strike when seven buses went out.

He said, “People know now that they are fighting for their future. One woman told me she couldn’t afford to be on strike.

At the Wembley garage the strike was solid and the picketing was enthusiastic. Not one passenger bus left the garage, though dispensation was allowed for the drivers taking out vehicles serving disabled school students and adults.

There was a united view on the picket line that drivers will not settle for less than 6 percent. “The company is making a lot of money, but it’s not willing to share it with London workers,” said T&G shop steward Mohammad Ali.

“We are the root of the company’s profit and we deserve respect. We’ve been here since 4am – no bus has moved.”

Perivale bus garage had around 40 on the picket line. Management tried to undermine the strikers by driving buses out to meet scabs at prearranged destinations. But support for the strike was better than last week.

The strikers were in a buoyant mood, and had set up a gas stove to make tea. A number of workers pointed out that after only one day of strike action Metroline increased their offer from 4 percent to 5 percent.

The T&G was planning to ballot drivers on Friday this week on the company’s offer of 5 percent. The union is not recommending acceptance. If the offer is rejected, the drivers will strike again on Monday 27 November.

Many of London’s workers struggle to survive on poverty wages. This is a crucial battle against low pay and for the future of London’s transport. 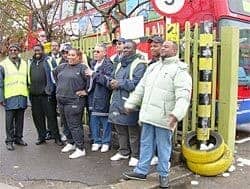