This article is over 18 years, 8 months old
FRANCE GROUND to a halt on Tuesday. Trains, buses and tubes stayed in their depots, planes in their hangars as workers walked out across the country.
By Paul McGarr reports from Paris
Downloading PDF. Please wait...
Saturday 17 May 2003

FRANCE GROUND to a halt on Tuesday. Trains, buses and tubes stayed in their depots, planes in their hangars as workers walked out across the country.

Many toll-booths were abandoned on the country’s pay-to-use motorways. Postal workers, civil servants, teachers, council workers and many more across the public sector were joined by many private sector workers in engineering and elsewhere. Firefighters and bank workers also joined the strikes. Print workers struck and no newspapers were printed for Tuesday.

Up to two million workers walked out in the biggest strike France has seen since the mass public sector strikes of December 1995. Those strikes broke a Tory government which assaulted welfare provision. This week’s walkouts turned on a similar assault. The stakes are just as high. ‘The street will not govern,’ France’s Tory prime minister Jean-Pierre Raffarin declared last week.

He is out to push through an attack on workers’ pension rights. The country’s bosses and Tory president Jacques Chirac back him. The street gave a roaring answer to Raffarin on Tuesday, as hundreds of thousands of strikers joined demonstrations across France. In Paris some 200,000 marched. Tens of thousands joined similar protests in at least 115 other towns and cities across France.

Raffarin wants to force workers to work longer to qualify for full pension rights, and pay more in contributions. Many workers will face lower pensions, as the government seeks to force them to take out additional private pensions linked to the stock market. Some workers could see pensions cut by up to 35 percent. Many British workers will recognise attacks they face from bosses and New Labour.

Firefighter Julien Valois told Socialist Worker, ‘We have a pensions scheme that allows us to retire at 55. It’s a hard job and we don’t want to be forced to work until 60 or 65 even. The government talks about ‘reform’, but that always seems to mean cuts and making us work longer and harder.’

‘We’ve been on strike since 8 May against the pension plans and government attacks on education,’ says classroom assistant Florence Baumler. Money ‘The teachers and the assistants are all together. The money is there. It’s just a question of whether it goes to profits or to social need. We have mass meetings every morning. We’ll be voting to stay out until we win.’

‘It’s simple,’ Samuel Thalieu, a 23 year old rail worker, said. ‘We pay 37.5 years contribution for our pension now. The government wants us to pay for 40, even 42, years. It’s like in 1995 when the government attacked welfare. We all had to strike. We have to do the same today.

Jean Leost, a nurse, said, ‘Raffarin says, ‘The street will not govern.’ But why not? We are the majority. That’s democracy. He wants to govern for the bosses and the bankers. We say no.’ ‘Some of us walked out today,’ Oliver Picard, a car worker at Renault Flins, told Socialist Worker. ‘It was a minority, but quite a lot. There are people here from Peugeot and big firms like Alcatel. This issue affects everyone.’

The opposition Socialist Party, equivalent of Britain’s Labour Party, verbally backed Tuesday’s protest, but its leaders agree with the government on pushing through pension ‘reform’.

The main trade unions backed Tuesday’s strike and demonstrations. They have called more days of action, including a national demonstration on Sunday 25 May. Action Many of those striking on Tuesday think that is inadequate, and want more determined action.

Tens of thousands of teachers are already on indefinite strike. They were determined to continue after Tuesday. Other groups of workers, including the powerful rail workers, were to meet on Tuesday or Wednesday to discuss whether to stay out. Some unions, those influenced by left wing organisations, are pushing for the strikes to be indefinite.

Other union federations, including the powerful CFDT and CGT, are seeking a deal with the government. No one knew which feeling would win out in the debate among rank and file workers raging on Tuesday evening as Socialist Worker went to press.

For the last eight years France’s bosses have been waiting for a chance to return to the offensive beaten back by the 1995 strikes. History had another powerful resonance. It was on the same date, 13 May, that 35 years ago a mass demonstration sparked one of the biggest general strikes in history, and almost toppled the government of Charles de Gaulle.

Tuesday’s Paris demonstration followed almost the same route as the historic 1968 march as it converged on the Place Denfert Rochereau. Some on Tuesday’s protest fervently hoped that workers today could show the same spirit to break the government’s assault as they did in 1968.

THE GOVERNMENT attacks on pensions and welfare provision in France is part of a wider assault across Europe. And it has been met with resistance.

Austria last week saw its first national strike for half a century against an attack on workers’ pension rights by the right wing government. Up to 500,000 marched. More strikes and protests were set for Tuesday. In Germany the Social Democrat (Labour) chancellor Gerhard Schröeder faces a growing crisis.

The biggest May Day marches for many years saw workers express deep anger over government plans to push through savage pension and welfare cuts. Schröeder is taking his plans to a special Social Democrat Party conference. The German chancellor has all but threatened to resign unless he gets backing for his plans.

German trade unions have staged the first in a series of ‘warning strikes’ at major engineering companies demanding a shorter working week to cut unemployment.

The powerful IG Metall union has threatened full-blown strikes. Behind the Europe-wide attacks on pensions and welfare lies an austerity drive which is being pushed by the European Union and the World Bank.

Germany and France are well over the government deficit limits set by the European Central Bank as part of the Maastricht Treaty which paved the way for the euro currency. 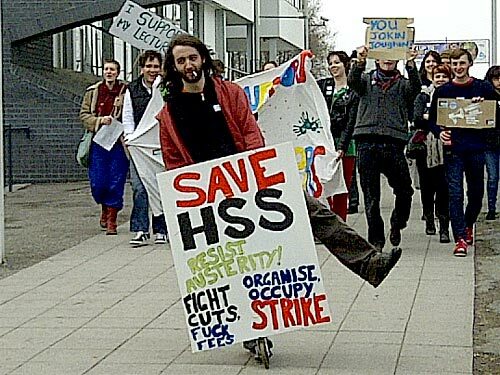 Pictures of the lecturers' strike on Thursday 24 March 2011