This article is over 11 years, 10 months old
Mike Watkins, the man behind one of the biggest civil service contracts, has been suspended following expenses fraud allegations.
Downloading PDF. Please wait...
Tuesday 16 March 2010

Mike Watkins, the man behind one of the biggest civil service contracts, has been suspended following expenses fraud allegations.

He “earns” £100,000 a year and was the driver behind the programme which awarded a company called Interserve a £750 million 15-year contract to run Defra’s estate and security.

The PCS led a campaign against this privatisation and balloted staff for action.

Management responded by offering voluntary redundancy packages – at least one civil servant took around £100,000 only to return to do the same job for a private company.

But many were compulsorily transferred to Interserve with terms and conditions protected by Tupe legislation.

Interserve consider staff expensive and many are threatened with compulsory redundancy. There is evidence that Interserve are attempting to avoid making payments staff are entitled to and it is understood that Interserve are not fullfilling the terms of the contract with Defra.

The Interserve Group has been fined £11.6 million by the Office of Fair Trading for offering bribes to secure contracts.

The majority of those working for Interserve have joined the PCS and a new branch is being set up.

Is there a generation that has ‘never worked’? 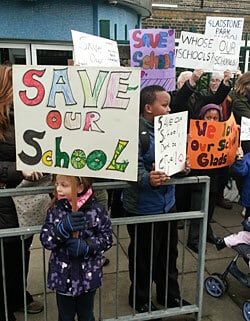 Standing up to Gove's forced academy attacks at Gladstone School

How inflation is eating into your wages