Demonstrators gather in Glasgow for protest march against cuts

Protesters are gathering in Glasgow’s George Square for the Scottish TUC’s anti-austerity protest.

Kathy Miller from NHS Glasgow & Clyde’s Unison branch (pc) told Socialist Worker, “We’re here because austerity is hitting hard. Hospital beds are being closed and there’s no support services in the community to fill in the gaps.

“People who have worked hard all their lives are having their dignity stolen. We have to continue to fight after today—and strikes should be actively considered. We’ve shown we can bring members out.”

Alan Robertson is from the Grampian postal branch of the CWU union. “The CWU is here today supporting other workers—but we’ll have our own fight over privatisation coming over the next year,” he said.

Mick Symon is from Unite’s road transport commercial branch. “We’re here to highlight the fight against unemployment—there’s a dispute in our sector in Marks & Spencer DHL,” he said.

“Some 250 were on strike on Thursday in Cumbernauld because they’ve already lost 100 jobs. They’ll be striking again on Monday.”

The Glasgow protesters included a delegation of NUT, Occupy and Unite activists who travelled up from Lancaster after a private firm pulled their chartered train to London.

Leigh Simpson, a youth worker and a teacher in the NUT, was among them. “We need to make sure children’s services are protected,” she said. “Young people are the future—and the goverment has stolen so much from them.”

Socialist Worker will be providing live rolling coverage of the demo through out the day. Follow us on Twitter at @socialistworker. Send your news and photos in to [email protected], or phone our reporters on 020 7819 1180. 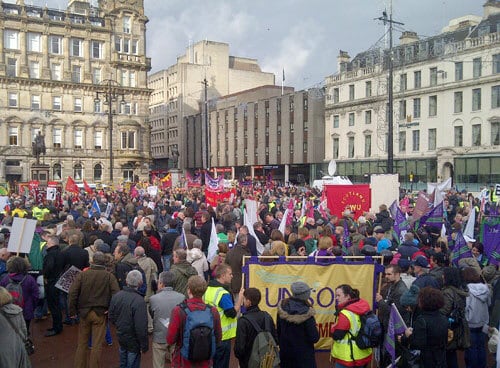 Thousands join Scottish TUC march to say no to cuts