Thousands marched in Liverpool against fascism on Saturday of last week.

The protest was called by the Unite union, with support from other unions and Unite Against Fascism (UAF). Unite’s office in the city is among several trade union targets attacked by members of the English Defence League (EDL) in the past couple of years.

With a brass band, the PCS union’s samba drummers and countless vuvuzelas, the march was noisy and confident.

“The EDL has had more of a presence on the streets in recent years, so the left and the unions need to be on the street too,” said Liverpool social worker Sinead.

Bus driver Preston had travelled up from London to join the demonstration.

“Fascism is a danger to people and communities, so any trade union that doesn’t work to oppose fascism is not doing its job,” he said.

The march was also part of a drive to make sure British National Party (BNP) fuhrer Nick Griffin is not re-elected next May. Liverpool is part of the North West constituency he represents in the European parliament.

Griffin could hang on for four more years by getting just 7 percent of the vote on a very low turnout.

“We’re not going to let the evil creed of racism and fascism divide our communities,” said Unite general secretary Len McCluskey. “We’ll come out and defend our communities where we need to.”

Petros Constantinou, president of the Greek anti-racist and anti-fascist coalition Keerfa, called for unions to back an international day of action on 22 March.

There was huge applause for UAF’s Weyman Bennett, who said former EDL leader Tommy Robinson had been “kicked off the stage of history by people who said ‘you will not pass’”

A dismal day for EDL in Bradford 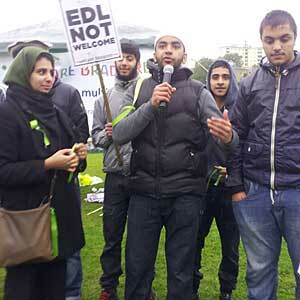 It was a dismal day for the EDL in Bradford as only 200 racists turned up to its national demo last Saturday. It was the organisation’s first since Tommy Robinson quit.

Osman, a student at Bradford College, said, “Just because the Nazis’ leader  has gone, it doesn’t mean the Nazis have gone.

“It’s just a face. Tomorrow there’ll be another. We have to come out to say this is our city and you are not welcome.”

More than 1,000 police swamped the town centre, shutting down streets as EDL thugs gathered outside the Queen pub.

UAF and We Are Bradford organised a counter demo, rallying 250 anti-fascists in the Urban Gardens. Some 200 then gathered opposite the EDL’s meeting point.

Police on horseback drove any Asian youths who tried to assemble across from the EDL back down the road.

Bradford MP George Galloway told the crowd, “Muslims will never agree to stay away from the centre of their own city.” 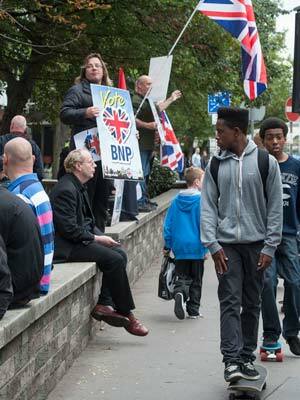