This article is over 16 years, 0 months old
Eight of nine anti-war demonstrators remanded in custody, including socialist and civil rights activist Eamonn McCann, have been granted bail in the Northern Ireland High Court. They had been charged following a protest at the Derry offices of US missile manufacturer Raytheon.
Downloading PDF. Please wait...
Saturday 12 August 2006

Eight of nine anti-war demonstrators remanded in custody, including socialist and civil rights activist Eamonn McCann, have been granted bail in the Northern Ireland High Court. They had been charged following a protest at the Derry offices of US missile manufacturer Raytheon.

The Derry offices of Raytheon were occupied for eight hours on Wednesday before police forced their way in and arrested the nine.

A ninth man Eamon O`Donnell, who was charged alongside them, did not seek bail.

The eight appeared by video link at the High Court. Naomh Lavery, for the Crown, told the court, ‘The protesters carrying placards identifying themselves as the Derry Anti-War Coalition staged a protest outside the Raytheon offices. Members of the crowd confronted two security guards who were punched and kicked.’

She said during an eight hour stand-off, office equipment and computers were damaged or thrown out of the windows. A mainframe computer suffered £150,000 of damage and the total damage was in the region of £350,000.

Defending the eight, Joe Brolly said there had been a meeting last Monday of the Derry Anti-War Coalition at which it was agreed they would hold a peaceful protest.

He described the charges faced by the men as excessive and proposed purely to prevent a magistrate granting them immediate bail.

He said: ‘This was essentially a matter of conscience. There is no requirement for these people to spend lengthy periods on remand in prison.’

He said Raytheon made ‘light of the gods’. Saying, ‘What they do and do extremely well is make missiles. They are purveyors of death.

‘They made 21.9 billion dollars last year and are the fifth biggest arms manufacturer in the world. They make bunker-buster bombs, Tomahawk and Patriot missiles, all of which are used in Iraq and currently in the Lebanon.’

Granting bail the judge told the men that each of them was accused of very serious charges and he said each man had expressed very strong views about international conflict and the Crown had opposed bail. However he considered bail was appropriate coupled with stringent conditions.

They were all excluded from the Ulster Science and Technology park where the Raytheon offices are sited and all were barred from attending any public meeting.

The judge said he would review the extent of the bail conditions on August 29.

Derry Anti War Campaign spokesperson, Sarah Quilty said, “despite what police have said, there was no violence at all involved in the occupation. No one was hurt, or even had a hand laid on them, in the course of the occupation.

“It is outrageous that our members have been charged with scheduled offences and with unlawful assembly and aggravated burglary. There were almost one hundred people outside Raytheon in the course of the day on Wednesday. Are we all to be charged with unlawful assembly? And anything that happened in the course of the occupation happened in an attempt to save lives and stop war crimes in the Middle East. There is no crime in that.”

Anti war protesters in Northern Ireland are set to march this Saturday in Belfast against the Israeli assault on Lebanon.

Send messages of support to the Derry nine at [email protected] 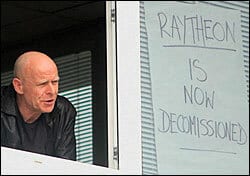