This article is over 9 years, 0 months old
Parliament was about to vote on deep cuts to benefits that millions rely on as Socialist Worker went to press.
By Dave Sewell
Downloading PDF. Please wait...
Saturday 12 January 2013

Parliament was about to vote on deep cuts to benefits that millions rely on as Socialist Worker went to press.

The Tories want to break the link with inflation for working tax credits, child benefit, jobseekers’ allowance and other working age benefits.

They want to cap future rises at just 1 percent a year, no matter how much prices go up.

Chancellor George Osborne says this will “save” £3.7 billion a year by 2015-6—at the expense of unemployed people and low-paid workers.

The Child Poverty Action Group says the changes will cut 4 percent from benefits in real terms over the next three years.

The Tories say that benefit claimants should share the pain of workers who have had below-inflation wage deals. But many of those same workers will also bear the brunt of this cut.

According to the government’s own figures, 30 percent of all households will lose money. The cut to child tax credits, for example, will hit 2.5 million women in work and a further million whose partners are in work.

And why should any worker, employed or not, pay the price for the bosses’ crisis? It is bosses and the government that are responsible for imposing below-inflation pay rises on workers.

But David Cameron wants to use benefit claimants, especially those out of work, as scapegoats for low pay. He also turned to another of his favourite scapegoats—migrants—by playing up the idea that people came to Britain to claim benefits.

“Should we look at arguments about, should it be harder for people to come and live in Britain and claim benefits?” he asked. “Yes, frankly we should.”

But most migrants come to Britain to work or to join relatives who are working—and face many obstacles to claiming benefits.

Meanwhile, the Tories have tried to justify some of the cuts by saying they are targeting the rich. So they have cut child benefit for households where one person earns more than £50,000 a year and scrapped it altogether for those on over £60,000.

“I think it is right that they make a contribution,” said Cameron. But in reality, means-testing universal benefits like child benefit makes it harder for everyone to claim them.

It introduces the idea that some people “deserve” benefits while others don’t and attaches more stigma to claimants.

If the Tories really wanted to target the rich they could tax them more. But their real agenda is to undermine the idea of universal benefits for all, and lay the basis for more vicious attacks to come.

» Labour joins in attack on the welfare state

» ‘Bedroom tax’ will force people out of their homes 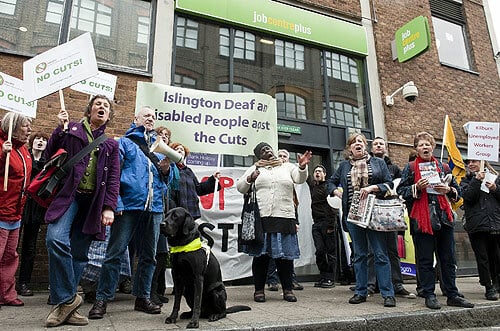 A gold medal for hypocrisy