The Territorial Support Group (TSG) police riot squad used its full might to crush protests in the City of London on 1 April, with tragic consequences.

Ian Tomlinson died after being hit and pushed by a TSG officer. Countless other protesters were injured by police.

The attacks on the protests were backed by chief police officers and the government. They have shocked millions across Britain.

It’s time that this state-sponsored violence was ended. The TSG replaced the notorious Special Patrol Group (SPG) – which was synonymous with smashing protests and the death of demonstrators.

Two members of the TSG have been suspended over incidents at the recent G20 protests. But the hundreds of videos and photos taken by protesters show that there were numerous acts of police violence that day.

The TSG are the most aggressively trained police in Britain. They rarely arrest demonstrators but instead use riot shields and baton charges against people.

The government and the police are worried about the growing anger against the system as the recession bites. They want to use their power to cow people and stop them from taking to the streets in the future.

The indiscriminate force they use has resulted in numerous injuries to protesters over the past few months, and represents a fundamental attack on the right to protest.

All the TSG officers involved in violent acts should be prosecuted. The TSG should be disbanded, and not replaced.

Met commander Simon O’Brien was in charge of the operation on the day.

He courted the media frenzy in the run-up to the protests, most notably with his now famous phrase, “We’re up to it and we’re up for it.” He also commanded his officers on the ground and planned the tactics for the day.

The kettling of protesters—“containing” people inside police cordons—and the police violence stemmed from his decisions. O’Brien should be sacked.

But individual officers are not solely responsible for the actions of the police that day. It is the police’s role in defending the status quo that led them to attack protesters.

We have to resist the attempts to crush protest, and challenge the system that the police defend, if we are to win justice for all the victims of police brutality. 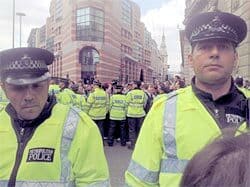