Discontent and demoralisation dominates throughout the Labour Party

This article is over 15 years, 3 months old
Clare Short’s move is not the only example of Labour’s crisis.
Downloading PDF. Please wait...
Saturday 23 September 2006

Clare Short’s move is not the only example of Labour’s crisis.

Last week health secretary Patricia Hewitt displayed total demoralisation and lack of trust in her own party by suggesting that its members could not be trusted to choose a new leader.

Instead, she says, there should be hustings across the country to make sure the successor to Tony Blair is “in touch”.

It’s not surprising that the high priestess of privatisation in the NHS now wants to outsource the leadership election.

She wants to water down the lingering class identification rooted in the unions’ control of one third of the vote for leader.

But her views will be ignored not just because they trample on the party’s traditions, but because it would be the Labour leaders’ nightmare to have a genuine public debate open to all about Iraq, pensions, privatisation and a host of other issues.

Geoff Hoon, the minister for Europe, called for Blair to quit before the Scottish, Welsh and English local elections in May.

Hoon was once one of Blair’s most trusted allies, a purveyor of myths to justify attacking Iraq and defence secretary through much of the Iraq war. But he was demoted from the cabinet in Blair’s last reshuffle.

Labour activists revealed they were calling for the party’s national executive to organise a leadership contest early next year.

A number of constituencies have tabled a motion for the party’s annual conference this month, which was to be considered by the conference arrangements committee this week.

Delegates from Manchester, Nottingham, Lincoln and elsewhere called for an “orderly timetable” for elections for a new leader “early in 2007”.

Kim Howells, minister for the Middle East, said Blair’s refusal to call for a ceasefire during 34 days of slaughter in Lebanon might have been a mistake.

He was reflecting the growing worries of senior figures in government that Blair’s defence of US foreign policy at every turn is increasingly disastrous.

Lord Falconer of Thoroton, the lord chancellor, denounced the US prison camp at Guantanamo as “a shocking affront to the principles of democracy”. Blair, though, refused to be drawn on the remarks. He has gone no further than to call the camp an “anomaly”. 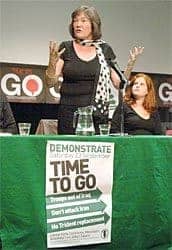 Clare Short: Labour is collapsing on the ground 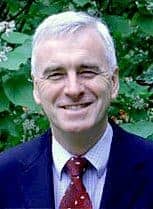