This article is over 18 years, 4 months old
POOR PAY and conditions on the buses have caused a wave of industrial action-here local activists report on the latest strikes in York, Nottingham and Liverpool.
Downloading PDF. Please wait...
Saturday 06 September 2003

YORK: Bus drivers in the TGWU union in York walked out on Wednesday of last week in their first day of action against their employer, First Group.

The 200 drivers then began a four-day strike last Saturday.

The action is over a long running pay dispute, with the employer refusing to discuss the union’s £8 per hour demand.

Drivers don’t get extra for overtime or working unsociable hours.

Eleventh hour talks failed and on Wednesday there was just a skeletal service of contracted park and ride routes operating.

The mood on the picket line was strong. One driver said, ‘We are ready for the long haul.’

Park and ride buses are running, using agency drivers and First Group managers who are getting close to the legal driving time limits.

Further controversy erupted when it emerged the strike would prevent a contracted service to a York out of town nightclub running on their busiest night.

First Group managers threatened six drivers with the sack if the service was stopped.

An agreement was reached whereby profits from the service, along with the driver’s wages, are donated to charity.

The picket line remains strong and the drivers are resilient in their cause.

NOTTINGHAM: More than 800 bus drivers in Nottingham are set to strike for the first time in over 30 years for 24 hours from 4am on Saturday.

Strikes could take place on the following two Saturdays and industrial action could continue into October if no agreement is reached.

An overwhelming majority voted for strike action-540 in favour, 74 against.

Danny Monaghan, TGWU secretary, said the offer of 4.1 percent for experienced drivers and 17 percent for new recruits, was rejected because it was not backdated to April and would be the last deal for two years.

Many receive the Working Family Tax Credit just to get by.

LIVERPOOL: The bosses on Arriva in Liverpool held last minute talks on Wednesday of last week to try to stop strike action set for Monday of this week.

More than 300 workers at the Arriva depot, in Bootle, voted to walk out this week.

The drivers are angry at attacks on pay, conditions and bullying by management. Action by the drivers would hit bus services across the north of the city including Liverpool, Southport, Crosby, Aintree and Maghull.

People Before Profit Charter: turning the heat on banks 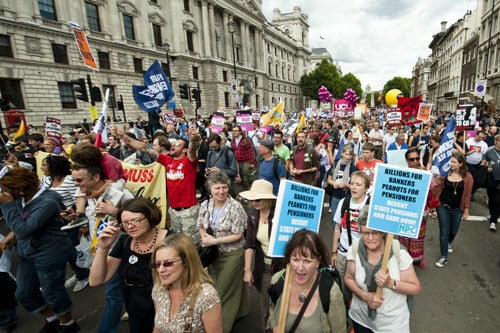