Do riots and violence set back our cause?

This article is over 10 years, 8 months old
Riots are one of the most dramatic ways that ordinary people can leap onto the stage of history. People who feel invisible most of their lives become the centre of attention.
Downloading PDF. Please wait...
Tuesday 10 May 2011

Riots are one of the most dramatic ways that ordinary people can leap onto the stage of history. People who feel invisible most of their lives become the centre of attention.

Rulers everywhere denounce rioters as an unrepresentative minority. They label them “hooligans” or “thugs” to avoid looking at the real causes.

The state likes to declare peaceful protests as “riots” to discredit them and justify their overreaction.

But riots are often a response to the violence that people are forced to live with every day—violence that result from oppression, poverty and alienation.

The violence of riots is generally minor compared to the violence the system inflicts on people on a daily basis. That is why riots often reflect a much wider bitterness than the spark that caused them.

Some on the left say riots achieve nothing except giving the state an excuse to clamp down on our rights and giving “us” a bad name.

But riots can win important concessions. They can have a global impact, and explode the myth that capitalism is a well-functioning system benefiting everyone.

Food riots in Haiti in 2008 forced prime minister Jacques Edouard Alexis to resign. In Britain, the poll tax riot of 1990 precipitated the downfall of Margaret Thatcher.

Riots against police violence and racism in Brixton 30 years ago terrified the state into acknowledging police racism and funding inner city projects and facilities.

The longest prison riot in Britain’s history took place at Strangeways prison in Manchester in 1991. Afterwards Strangeways was rebuilt and particularly degrading practices began to be phased out.

We can’t be limited to what our rulers deem acceptable behaviour.

What if the suffragettes had done that? It would have taken much longer to win votes for women.

Our rulers’ view of what is acceptable is based on stopping effective action. Their idea of acceptable behaviour is, in any case, appalling. The official definition of a riot in Britain is when 12 or more people “use or threaten unlawful violence for a common purpose”.

Yet the lawful violence of the system—of the police and prisons, of the state’s wars and poverty and disease—is accepted.

Riots often happen in the context of wider action. During a general strike in Spain last year, police sparked riots when they tried to stop strikers picketing.

Workers fighting off police during big strikes in the US in the 1930s were defined as rioters, as are black and Asian people who defend their streets from the Nazis today.

Riots involve people coming together collectively to resist, sometimes with a high level of organisation. They can grow into urban uprisings where people take control of entire areas—like in Derry, Northern Ireland, in 1969.

They can be “festivals of the oppressed” as people get a glimpse of their own power. Experiencing the violence of the state, the retribution of judges and the lies of the media can politicise people.

But their impact depends on the wider political situation, the level of struggle and organisation.

Where there is a low level of collective organisation and individuals are not connected to a wider movement, riots can rise and fall quickly. The initial burst of power against the force of the state is difficult to sustain and can become trapped in confrontation with the state.

Workers are strongest in their workplaces, where they can stop the wheels of capitalism from turning and grind the system to a halt.

Organised mass collective action by workers can wrench power from the tiny elite that runs the world in its interests.

As the revolutionary Rosa Luxemburg said, “Where the chains of capitalism are forged, there they must be broken.”

Collective power in the workplace enables the progress of a movement to be decided democratically and collectively. That isn’t the case in the midst of a riot, however liberating.

Nonetheless, riots represent the anger people feel at the injustice of the system, and should be defended. As Martin Luther King put it, “Riots are the voice of the unheard”.

The unheard should be heard more often. 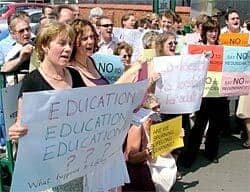 Why does our union give money to Labour?