This article is over 16 years, 0 months old
Craig Murray, the former British ambassador to Uzbekistan turned campaigner against torture and human rights abuses, has defied a foreign office order to hand over documents that expose the British government’s complicity with torture.
By Anindya Bhattacharyya
Downloading PDF. Please wait...
Saturday 07 January 2006

Craig Murray, the former British ambassador to Uzbekistan turned campaigner against torture and human rights abuses, has defied a foreign office order to hand over documents that expose the British government’s complicity with torture.

His actions, coming at the same time as the revelations from Greece (see page one), will add to the embarrassment for New Labour.

Foreign secretary Jack Straw has repeatedly claimed he has no knowledge of British authorities using information obtained through torture. But the Murray documents undermine this posture of feigned ignorance.

The foreign office is trying to block the publication of Murray’s new book about his time in Uzbekistan. In particular they demanded that he remove all references to two government documents and hand over all copies of those documents.

But instead the documents were released on the internet at the end of last year. One contains a series of letters from Murray to the foreign office warning that “intelligence” being passed to Britain from Uzbek security services had been obtained through torture.

The second document is a legal opinion from foreign office lawyer Michael Wood that seeks to justify the government using information obtained by torture. Wood claims that the use of such information does not break the UN Convention on Torture.

“In March 2003 I was summoned back to London specifically for a meeting at which I was told to stop protesting about torture,” says Murray. “I was told specifically that it was perfectly legal for us to obtain and to use intelligence from the Uzbek torture chambers.”

An intelligence official called Matthew Kydd was present at that meeting. “Matthew Kydd said that they found some of the material very useful indeed with a direct bearing on the war on terror,” Murray notes in the first document.

Murray describes the Michael Wood minute as “perhaps the most important document that has become public about extraordinary rendition… It is irrefutable evidence of the government’s use of torture material.”

Despite the importance of the Murray documents, the mainstream media initially ignored their release into the public domain. The Morning Star and the Independent were the only daily papers in Britain to pick up on the story at first.

The British government has come under increasing pressure over the past month as details of the routine use of torture sanctioned by US authorities come to light.

The CIA practice of “extraordinary rendition” — kidnapping suspects and shipping them out to secret prisons abroad for torture and interrogation — has come under severe criticism.

The British government has responded by pretending it knows nothing about such practices — claims that have been contradicted by Colin Powell, former US secretary of state.

“I have absolutely no evidence to suggest that anything illegal has been happening here at all,” he said. “All this stuff about camps in Europe or something — I don’t know, I’ve never heard of such a thing. I can’t tell you whether such a thing exists because I don’t know.”

Also read » How the internet bloggers broke the story

Download the two documents here. The first is a collection of Craig Murray’s letters (68KB PDF). The second is the legal advice supplied by Michael Wood (144KB JPEG).

For more information go to Craig Murray’s site at www.craigmurray.co.uk 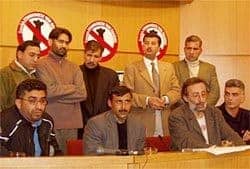